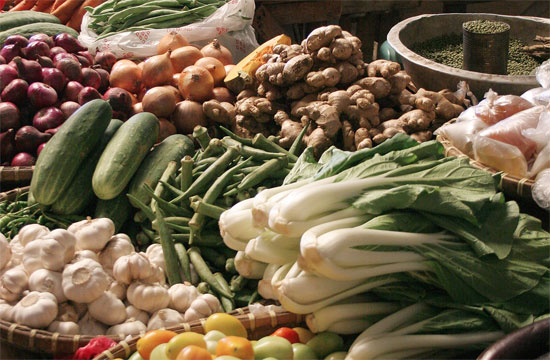 With all the raves about Dave Beran’s new Vegan menu at Next — with some declaring it a groundbreaking menu that explores a vegan diet’s potential — one would think that vegans themselves would be proud to claim the menu as One Of Their Own. One would not initially expect to find a Chicago Reader article written by a hardcore vegan, declaring that the extravagant menu is the most un-vegan thing he’s ever tasted. And then one might scroll down to the comments and see this: “Well, the only problem with serving a vegan menu is the damn vegans, of course.”

Not as if the menu wasn’t delicious — in fact, Kevin Warwick enjoyed his meal thoroughly — but felt uncomfortable about the extravagance of the entire concept. In his case, “veganism” implies a sort of grungy, modest asceticism, associated with burrito joints and frozen bags of broccoli and “servers sporting cutoff jean shorts and half-sleeve tattoos, the kind who sidle up to your table with your tempeh Reuben.” This veganism, however, seemed to cater towards meat-eaters, “particularly those who might revel in the challenge of finding a vegan meal that lives up to its exorbitant price tag.”

Though the “creamy” purees and “meatier” dishes—like the mushroom cart, which had an earthy warmth and comfort-food heartiness, and the swiss chard and douchi (a battered and fried mini chard leaf served with fermented bean paste and house-made seitan)—could easily elicit a “No way is this vegan” reaction from a blind taste tester with a taste for flesh, it’s Next’s trademark pageantry and its over-the-top flavors and executions that made the marathon meal, to me, inherently unvegan. Simply put, a $225 (with wine pairings) vegan vision quest is a little too much for my more . . . sparing lifestyle. The courses were more like facilitators to the overall spectacle of being a beans-and-rice vegetarian in a foreign land of fine dining.

The entire article is a fascinating (to us animal-eaters) look into the simple philosophy behind veganism — and it’s probably a philosophy that would panic over the thought of carrot-on-grape violence.