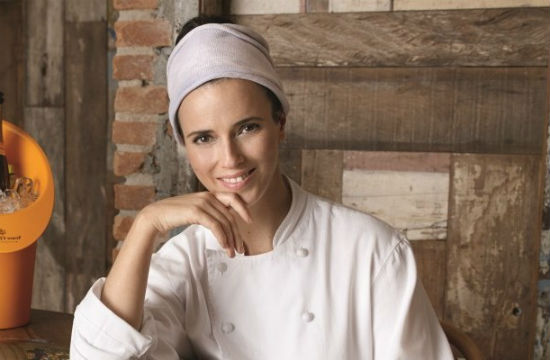 This year’s Veuve Cliquot World’s Best Female Chef title goes to São Paulo, Brazil’s Helena Rizzo, who helms the kitchen at Mani. The Best Female Chef designation is named by the same parent organization who puts out the World’s 50 Best Restaurants list annually, and there has been well-documented kerfuffle around whether the designation of Best “Female” Chef should even exist. We’d never take the thrill of an award away from any lady chef, but we will huff passive aggressively over some of the language in her Veuve Cliquot bio (huffy emphasis ours):

After a brief stint running the kitchen of the city’s Na Mata Café, the young Rizzo embarked on a culinary grand tour around Italy and Spain that culminated at seminal Girona restaurant El Celler de Can Roca. It was here that she met her future husband, the Spaniard Daniel Redondo. The pair opened Mani in 2006 and continue to run the kitchen (and indeed the rest of the restaurant) as a partnership. This highly unusual approach clearly works: Rizzo’s delicate, openly feminine style is allowed to shine through, making Mani one of the very best restaurants in Latin America – led by the Veuve Clicquot World’s Best Female Chef.

Her “delicate, openly feminine style”? Which has what application to food, exactly? Yeah, this is why people don’t like the designation of Best Female Chef.