WATCH: Anthony Bourdain Does Care About The Taste After All 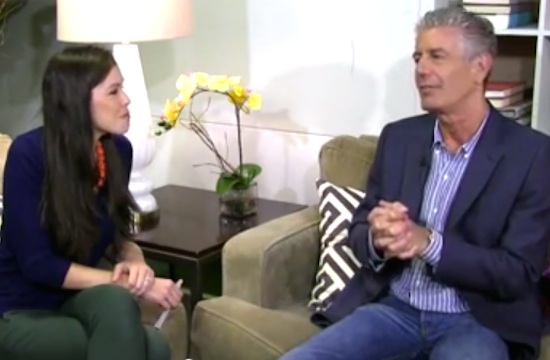 Our friend Ali Rosen at Potluck Video (disclaimer: yes she’s a friend of ours; yes she’s awesome) talked to Bourdain a bit more about the things he doesn’t usually get to talk about: The Taste, his publishing work, his target audiences for his many different shows. (OK, so there’s a little bit of Parts Unknown in there.) But it’s nice to see that Bourdain really does care about The Taste (even if, let’s be honest, not many others do). About his role as a chef and mentor on The Taste:

I enjoy it, I take it very seriously. I go in every year … ‘I’m not going to [care], it’s just a show, it’s just a silly TV competition … It doesn’t really matter.’ .. Very quickly — I think it’s true of all us — we become very invested in the success or failure of not just our team, but the cooks on the other teams as well. Surprisingly, I think some people, given my reputation … will be surprised — [I’ll be] pretty nice and supportive in my role as a mentor.

OK, so maybe he doesn’t care all that much, but ends up caring. So we should be watching The Taste after all?

Watch to learn what Bourdain says about the next great international cuisine he wants to take over America next (hint: he’s eaten there before), the pressures of catering to a TV audience, and the meritocracy of the blind taste test.