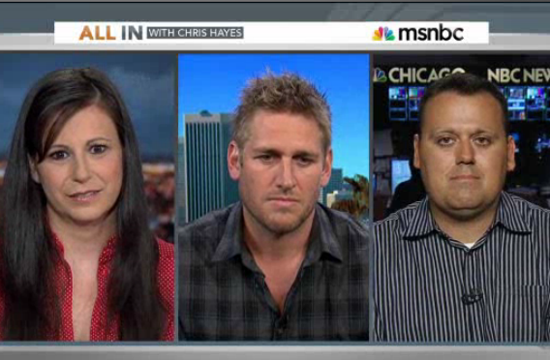 Naturally, when science unveils the first hamburger grown in a petri dish and serves it to humans, our first instinct is to run to chefs and ask: OH MY GOD IS THIS MEAT SAFE FOR OUR BODIES AND WOULD YOU EAT IT, CHEF? WE WON’T EAT IT UNLESS YOU EAT IT.

Thus, Chris Hayes invited three prominent chefs to debate the matter on his MSNBC show, and for once, their specialties were relevant to the topic: veggie-highlighting Dirt Candy chef and Braiser Friend Amanda Cohen, molecular gastronomy-obsessed Homaro Cantu, and grumpy naturalist Curtis Stone. Though all three vehemently refused to serve the lab-grown meat in their restaurants (mainly due to the fact that it tasted disgusting), only Stone admitted his discomfort with the idea of growing meat in a lab.

“I think it’s a real shame that we put so much energy and resources into science trying to develop food that is not natural,” he told Hayes, adding that the food industry already wastes 40% of what it produces. But before you wonder whether Curtis Stone’s been watching too many reruns of Koyaaanisqatsi, he emphasizes later that he’s not anti-science at all — fish farming, for instance, saves the ocean! — he’s just anti-weird foods created in a lab:

“There’s definitely a place for science in food, but we also live in a world where diabetes is off the charts, and we have all of these health and diet-associated problems in society, and it’s because we’re eating all these shelf-stabilized processed foods with a lot of sugar, and a lot of salt, and a lot of stuff that’s out of balance.”

Check out Curtis’s fundamental discomfort with an increasingly technologized world, as well as Amanda’s patient explanations that Dirt Candy serves vegetables, and meat, even if grown in a petri dish, is not a vegetable, Chris.

RELATED:
Google Co-Founder Sergey Brin: I Funded The Lab-Grown Hamburger
WATCH: Michael Pollan Teaches Us About Grisly Pre-Gastronomy Caveman Deaths
When A Chef Marries A Microbiologist, The Results Are Delicious