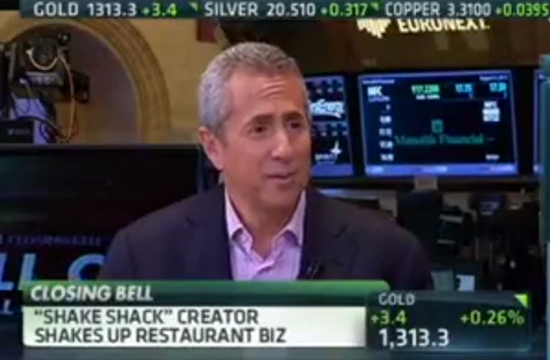 With 29 locations and counting, Shake Shack’s rapidly transformed from a hot dog cart in Madison Square Park into a global burger powerhouse. Everyone wants to be a part of it, and if they can’t actually be Danny Meyer and wear his dad-khakis, they at least want a piece of the burger anti-chain’s action. Thus, on CNBC’s Closing Bell, Maria Bartiromo asked the burning question: Will Shake Shack go public and list their company on the NASDAQ, pretty please? Pretty please with ShackSauce on top?

Meyer’s answer: a flat-out no.

Baritromo then tried to fake him out by asking for its IPO date — that is, the day when Shake Shack would begin listing its stock publicly. His answer again: “Nope.”

That was about as subtle as a hand-cut french fry replacing the frozen squiggles at Shake Shack, but we guess that Baritromo et al really want to talk about the market capitalization potential of delicious burgers, which is way more interesting than potential nominees for the Chairman of the Federal Reserve (ugh, Larry Summers is more boring than a hamburger). Also, we’re not exactly business analysts, but we did notice that variations of “shake shack stock” or “will shake shack go public” are wildly popular Google search terms, so yeah, Mr. Meyer, the people are asking…

Watch the entire clip below: