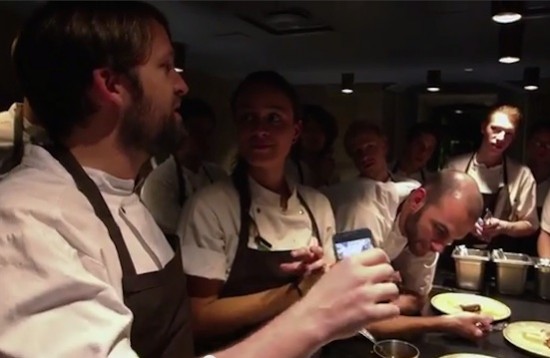 Much like wondering over the curious genius of, say, strong>Ferran Adria, we enjoy watching the creative juices pour out of some the most talented chefs out there. And while Rene Redzepi may be pondering over foods like pig ears instead of a head of lettuce, it’s still a particular brand of genius we’re watching in a never-seen-before video of Redzepi.

This is what it’s like to sit in on one of Redzepi’s “Saturday Night Projects” with his proteges. According to Phaidon Press, this is what Redzepi does every night after a Saturday night dinner at Noma: let his young chefs test out recipes they’ve been working on. Sitting around tables, hovered over plates, Redzepi with a cell phone in hand, is how the team unpacks new flavors and concepts together. Part casual dinner, part training, part motivational seminar.

First off — imagine being those young chefs. The young female chef who presents a kale dessert to the team looks like she might vom at any minute. (Think Rosio Sanchez can relate?) Imagine giving a presentation to your entire company, and your boss — except that your boss is Bill Gates. Yet this is where Redzepi shines. From the short film:

Redzpi: “You put yourself on a limb. You could have made a caramelized ice cream, with raisins, and everyone would have cheered right now, but you choose a cabbage dessert. So that’s really putting yourself out there. You are totally challenging everything people think about dessert-wise. So having that said, how many [chefs in the room] like this dish?”

[Nearly everyone, including Redzepi, raises their hands.]

What a mentor. What a chef.

What do you think this will look like come the Noma Tokyo pop-up?