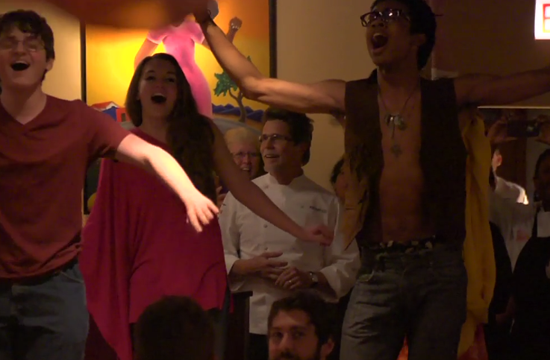 This weekend, Chicago chef Rick Bayless turned 60 (which legitimately shocked us, because, really? 60? He does not look 60, what kind of Aztec shaman ingredients does he eat to look that young? Please tell us).

To celebrate, a flash mob took over Frontera Grill in one of the cooler birthday celebrations we’ve seen so far: a well-executed medley of Age of Aquarius, the Nina Simone classic Ain’t Got No/I Got Life, and Let The Sunshine In. (Is Bayless a fan of the musical Hair? Because boy can he belt.)

The flash mob was filmed by Scott Dummler, Bayless’s director on Mexico: One Plate at a Time, and Bayless had no idea this was coming.

Oh god, this is such infectious happiness. Even we feel joyous and content by watching this. Hell, this is better than coffee. We’re watching this three times through. Screw you, coffee!

Frontera Flash Mob from The Mint on Vimeo.