WATCH: Andrew Zimmern Reveals The Secret To His Success 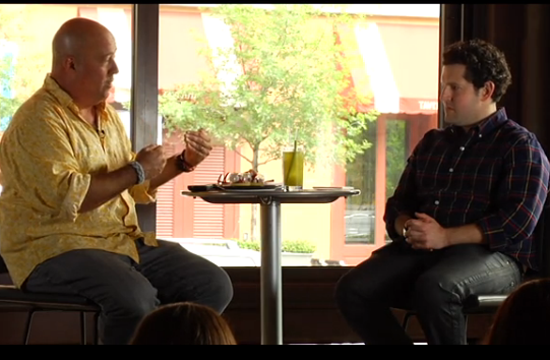 Bizarre Foods’ Andrew Zimmern has a job coveted by grumpy intellectuals with elitist tastes, but succeeds at it precisely because he’s not a grumpy intellectual with elitist tastes. In his talk with Food Republic on the growing popularity of Asian food, he reveals why he believes he’s succeeded at a show that, in the wrong hands, could just end up as one of those snooty shows where people with liberal arts Ph.Ds eat weird food.

“The idea with the pilot was, ‘How do you capture people’s attention, and then how do you give them something that you don’t already know?'” he told the site’s Contributing Editor Matt Rodbard at a talk in the W Austin. “My secret to success, that I probably should not share but I will anyway because I’m an open-source kinda guy, is: if you can pair up things that people already know, and they love and accept, and you can tell them something about it that they didn’t know, you are magic. You are baiting the hook, and pushing the fish onto it at the same time.”

So essentially, he’s like one of those guardian angels that help the newly-dead adjust to postlife? (Come to think of it, we’d love Andrew Zimmern to help us adjust to the afterlife!) Anyways, how does this apply to Asian food? Welp, someone’s gotta hold people’s hands as they venture from sweet-and-sour chicken to the crazier stuff (hello, chicken feet). See below: