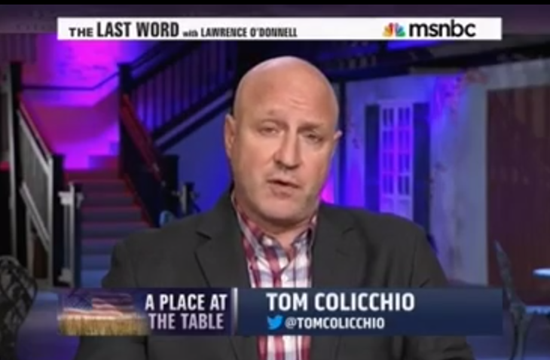 Despite House Republican leadership hammering out a deal with Democrats to pass a version of the five-year omnibus Farm Bill, conservative members of the House GOP caucus defeated the measure yesterday on the grounds that there weren’t enough cuts to the Supplemental Nutrition Assistance Program (SNAP), or food stamps. This has made Tom Colicchio, a.k.a. America’s Culinary Welfare Bear, very, somewhat happy.

“Hunger advocates are just thrilled that this version of the Farm Bill didn’t pass,” he said last night on The Last Word with Lawrence O’Donnell, where he and stand-in host Alex Wagner singled out the Texas Republican delegation for their role in increasing the cuts to SNAP. “It was literally going to take food out of the mouths of children, people with disabilities, working families, seniors — it was just really devastating. But ironically,” he added, “it didn’t pass because there are those on the right who didn’t think it went far enough.”

Colicchio and Wagner singled out Reps. Louie Gohmert, Stephen Stockman, and Mike Conway — all Texas GOP congressmen — as screwing over the four million Texas residents who also happen to be SNAP recipients. “I hope that [Texans] realize that they’re getting shafted by their representatives,” Colicchio said, “and when it’s time to vote them out of office [in 2014], speak up.”