WATCH: Woman Fails to Realize that Naming a Food Truck ‘Cockasian’ Is A Terrible Idea 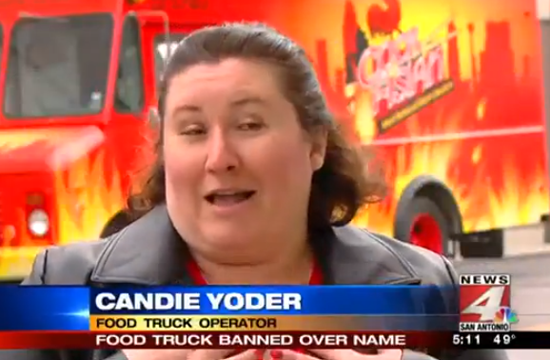 Port San Antonio, TX did a great thing yesterday when it announced that it would ban a Korean food truck with a stupendously offensive, racist name from its premises. The truck is called “Cockasian.”

“We thought the joke could be offensive to others,” Port San Antonio spokesman Paco Fellici explained to local TV station News 4.

Deep breaths. Okay, let’s chalk this up to a woman thinking that a somewhat off-color joke involving an entire racial group is a great idea. Truck owner Candie Yoder summarizes her thought process thusly: “The joke was that I was a Caucasian person doing an Asian food truck without a background of being Asian, I guess.”

Let’s not begin to get into the imperialistic aspect of a white person with no experience in Asian food doing a Korean food truck (which has already given us so many headaches in the past). Let’s not even go into the uncomfortably, racial stereotype-driven sexual implications of putting “cock” next to “Asian,” because that would take up pages and pages of analysis and would probably drive this writer into an apoplectic, mouth-foaming fit. (We’ll let Bitch Magazine explain it here).

The alpha and omega of what is wrong with this entire scenario is that someone used someone else’s race to make a joke about something else, mostly because it opens one up to all the really uncomfortable race questions we just mentioned above (and more). That’s pretty much it. It’s so simple, but so consequential. Lady, take it from me: using race as a punchline is a terrible way to make a joke.

(Besides, you’ll get just as much business for your truck if you simply put the words “Korean Taco” in the name. Trust us.)