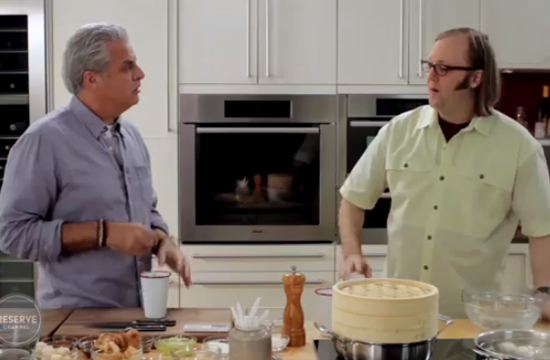 In the latest episode of Eric Ripert’s On The Table, we not only see why Wylie Dufresne is known as a Notorious Egg Slut (TM Anthony Bourdain), we also get treated to an interesting debate between the two chefs on their wildly divergent cooking philosophies. Ripert, who admits that he went into cooking partly because of his ADD, relies heavily on instinct and can’t initially grasp why Wylie loves bringing technology into the kitchen so damn much.

For Wylie, though, he wasn’t satisfied as a classically trained chef who wanted to see the inner workings of the food itself “I knew how to cook — to roast a chicken, to poach an egg — but I didn’t know why,” he explains. “I didn’t know what was going on. What’s happening to an egg while it’s cooking? I was looking for more answers, and as I began looking for more answers, I needed to go outside of the industry, and began to discover that there were other food scientists out there.”

Fast forward many discoveries, centrifuges and immersion circulators later, and Dufrense now has an egg scientist working with him full time — a natural evolution. And while we don’t believe that one approach is inherently better than the other, it’s still fun to watch the two try to come to some sort of mutual understanding.

Watch the egg action below: