Well That's Lovely: 20% of All Chinese Farmland Is Polluted

Well That’s Lovely: 20% of All Chinese Farmland Is Polluted 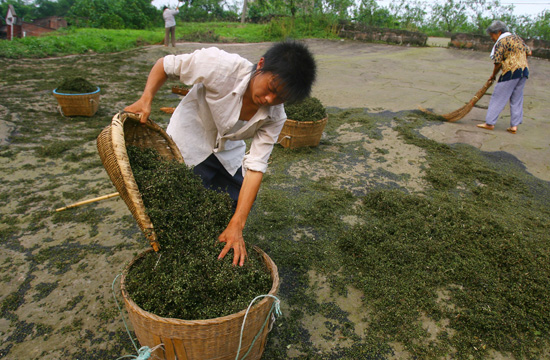 This isn’t good news for China: a seven-year-study has found that nearly one-fifth of all Chinese farmland — an area the size of Great Britain, for scaling purposes — is polluted.

The Wall Street Journal reports that 19.4% of China’s arable land contains high levels of cadmium, nickel and arsenic, mainly runoff from agriculture and factories dotting rural China.  The effects are already widespread: about half of Guangzhou province’s rice crops contain poisonous levels of cadmium, and villagers in these areas have experienced soaring cancer rates.

And that’s just what the notoriously tight-lipped China is ready to admit: Quantz speculates that China’s polluted farmland is about 40% of all its arable land, not enough to sustainably feed the country. That, combined with river pollution and poor air quality, could lead to an extremely poor future for China’s food industry:

So much polluted soil means China will likely have to begin importing more food. “China will need to ease pressure on its natural resource base and import more of its food over the long-term,” said Fred Gale, an economist with the U.S. Department of Agriculture’s Economic Research Service. “Agriculture is impacted by industrial pollution but also creates a lot of pollution itself,” he said, citing waste and ecological damage caused by China’s growing taste for meat.

Unsurprisingly, no one is happy, nor do they believe that the Chinese government will do anything about it. “”I’m concerned, but I can’t fix it. The whole country is the same. You have to eat or you’ll starve,” Xiang Ju, a 29-year-old fruit vendor, told WSJ.

RELATED:
Farm Bill Finally Approved by Congress After Three Years; It’s About Darn Time
LIST: Here’s What Happens to Your Food When the Government Shuts Down
YAY: Meat Inspectors Won’t Get Furloughed During Sequester