When A Chef Marries A Microbiologist, The Results Are Delicious 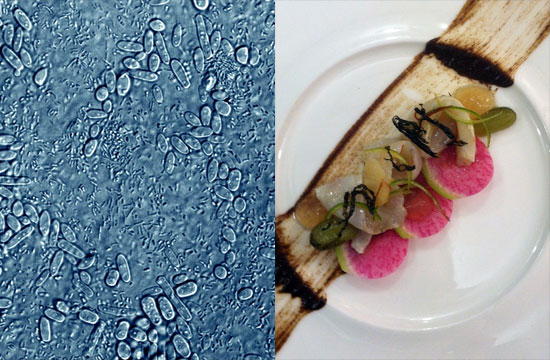 In a new column called Chefology, Boston Magazine introduces us to “Ben Wolfe (a Harvard microbiologist) and Scott Jones (the chef de cuisine at No. 9 Park),” who “explore the relationship between biology and haute cuisine.”

That’s not the only relationship on display, though, and it’s fascinating to see how each man’s profession influences their partner’s work. Wolfe is sought after by chefs and artisanal producers around the country to help them ferment cheeses, meats, and anything else that involves tiny microbes rotting food (we’re assuming he’s colleagues with Momofuku’s Harvard microbiologist consultant, as well), while Jones, a former biology grad student, runs the kitchen at a top Boston restaurant. This means that Wolfe gets to play around with potentially explosive dishes in his husband’s kitchen, using, in this case, fermented foods:

Ben was experimenting at home with making his own unsightly (but delicious!) kombucha. When we dared to try it, it tasted sweet, sour, and kept some of the bitter flavors of tea. Similar to the sunchokes, this made Ben think of fish, and say to Scott, “You should use kombucha on the menu. Maybe marinate some fish with it.” And as one learns in marriage, this is not a suggestion, but a requirement. “Yes, chef,” was the response.

But unlike some well-meaning spousal suggestions, this one worked marvelously — and we’re just going to have them describe the results, because damn, we wouldn’t have thought of this ourselves:

Scott picked turbot, a fish with a firm texture and higher fat content, to stand up to the kombucha. Turbot was sliced thin, marinated in kombucha, and then dressed with warm oil seasoned with garlic, chili threads, and lime zest, as a form of escabeche. It was paired with black garlic (a fermented garlic), pickled watermelon cucumbers (also fermented), and watermelon radishes (which are not fermented, but taste funky). The funk of the kombucha carried through the dish and added a depth of flavor that vinegar or tea alone wouldn’t achieve.

The rest of the column is definitely worth the read for science nerds and relationship nerds (which we totally believe is a thing) alike.