When Questlove Curates the Food for an Event, it’s Pretty Epic

Not to brag, but this week we spent two nights with Ahmir ‘Questlove’ Thompson, New York’s coolest guy. We use the word “spent” loosely. What we mean is we were in the same room he was two times this week, and we felt infinitely more awesome than usual because it’s never a bad idea to be where Questlove is.

On Monday night, he was the guest of honor at The Play Company‘s annual Cabaret Gourmet. The event raises money for the organization, which produces outstanding contemporary plays from around the world. They bring in chefs from some of New York City’s best restaurants and the night is full of good food, good drink, good music, and good old-fashioned fundraising for the arts. Cool. This year, the event got an extra dose of cool, because Questlove curated all of the food.

Over the last few years, the bandleader of The Roots/musical director for The Tonight Show/Brooklyn Bowl DJ/social media star/many other things we can’t think of right now has made a name for himself in the food world. It’s been a slow build, and he has said he’s been “very leery of [his] entry into the fraternity or sorority of these people,” these people being what Anthony Bourdain calls the “chef mafia.” But he takes it seriously, and in 2016 we can say he’s definitely in it.

In 2013, he, along with Stephen Starr opened Hybird, a fried chicken joint after years of testing a recipe. The recipe was so good that David Chang had something to say about it:

@questlove I think we need a fried chicken contest on @jimmyfallon. @juvonen how do we make this happen. Questlove is going down.

For the record, they did battle, and Questlove did go down. But if Chang is talking about your fried chicken, you’re doing it right. Lately, he’s been hosting food salons in his New York apartment. He brings together chefs, artists and celebrities, and it’s unquestionably the place to be if you can score an invite. We can’t, so an event where he’s curated the food is the next best thing.

Here’s what was up when Questlove curated the food for the Cabaret Gourmet: 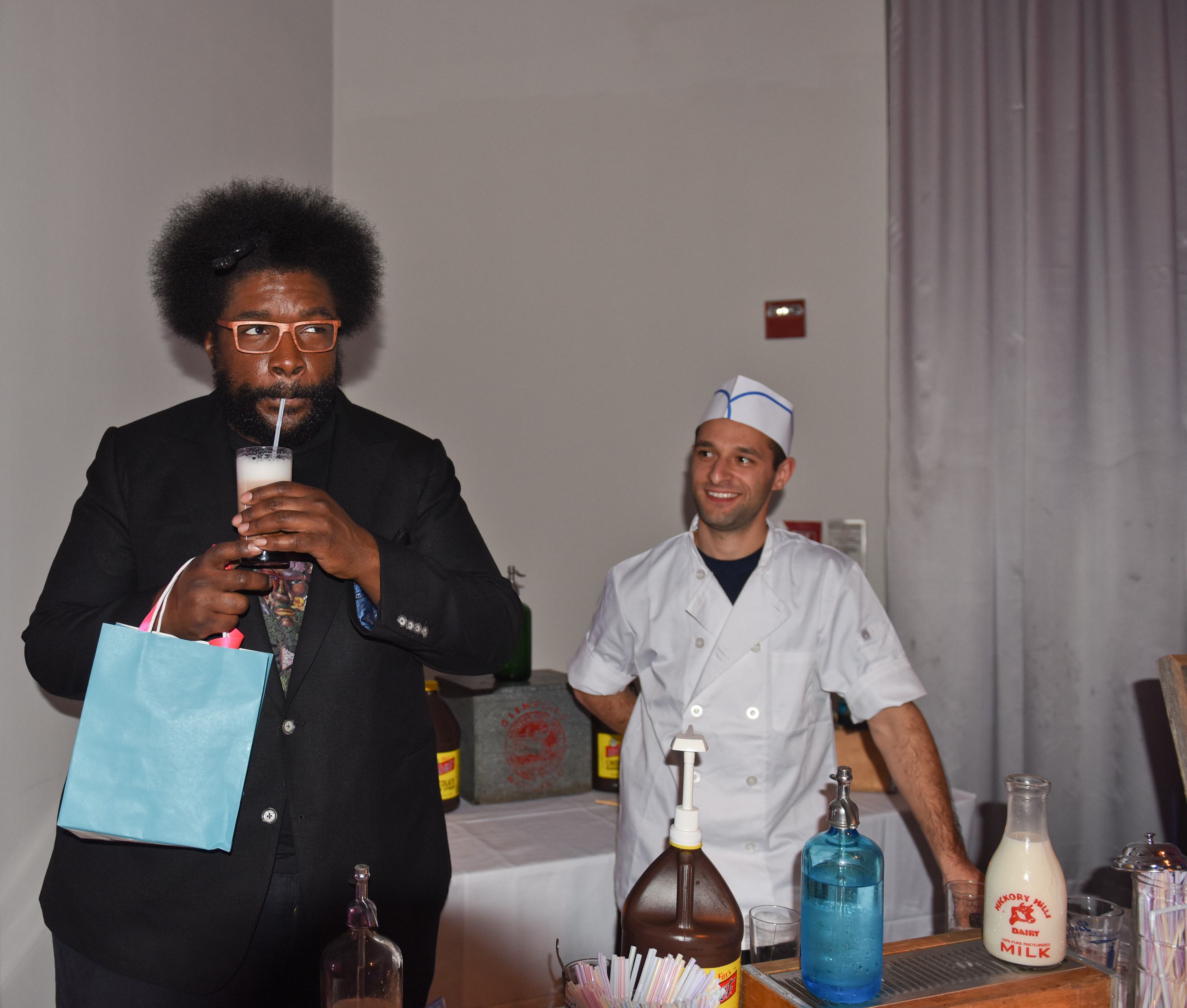 Mark Ladner of Del Posto was hanging out, and he was making Del Posto’s Tri-Mezzini: Chicken, Tuna, & Egg, aka the best combination deli salad sandwich ever: 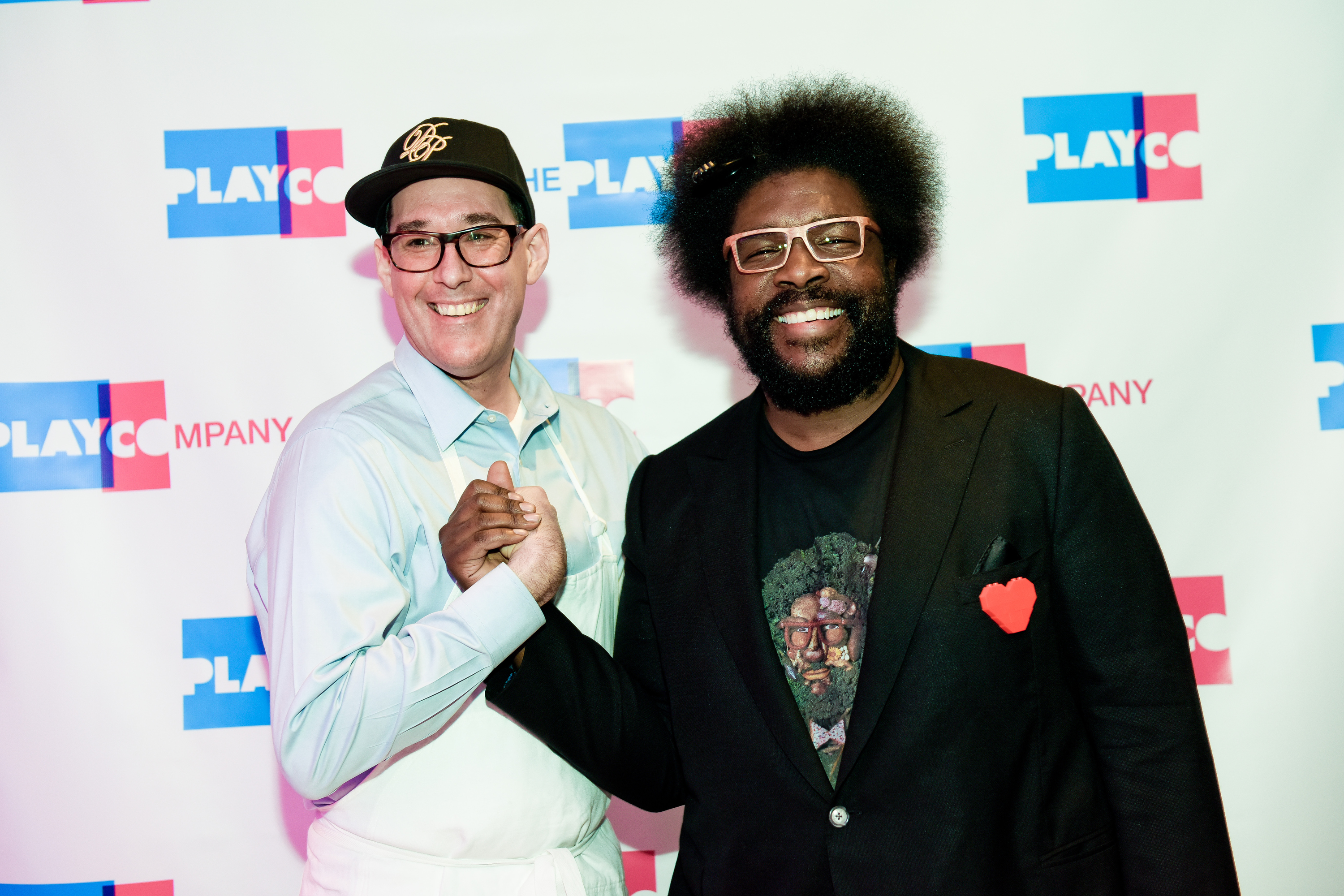 Eduard Frauneder of Edi and the Wolf and new hotspot Freud and a team were there making a Homemade Head Cheese Terrine with Pumpkin Seed Vinaigrette and Breakfast Radish: 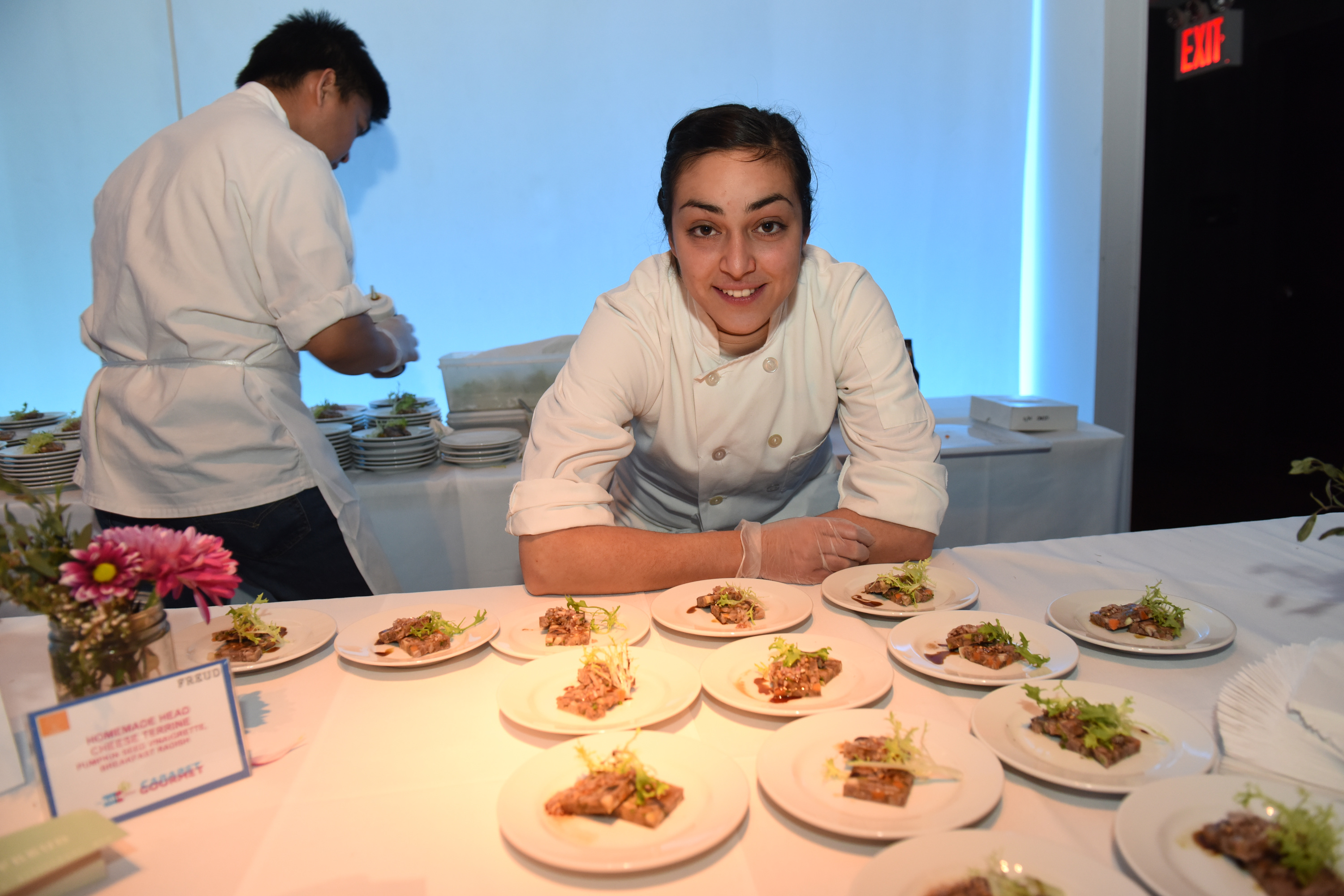 Jehangir Mehta of Graffiti Food & Wine / Me and You made a to-die-for Garli Soup with Chickpea Caviar: 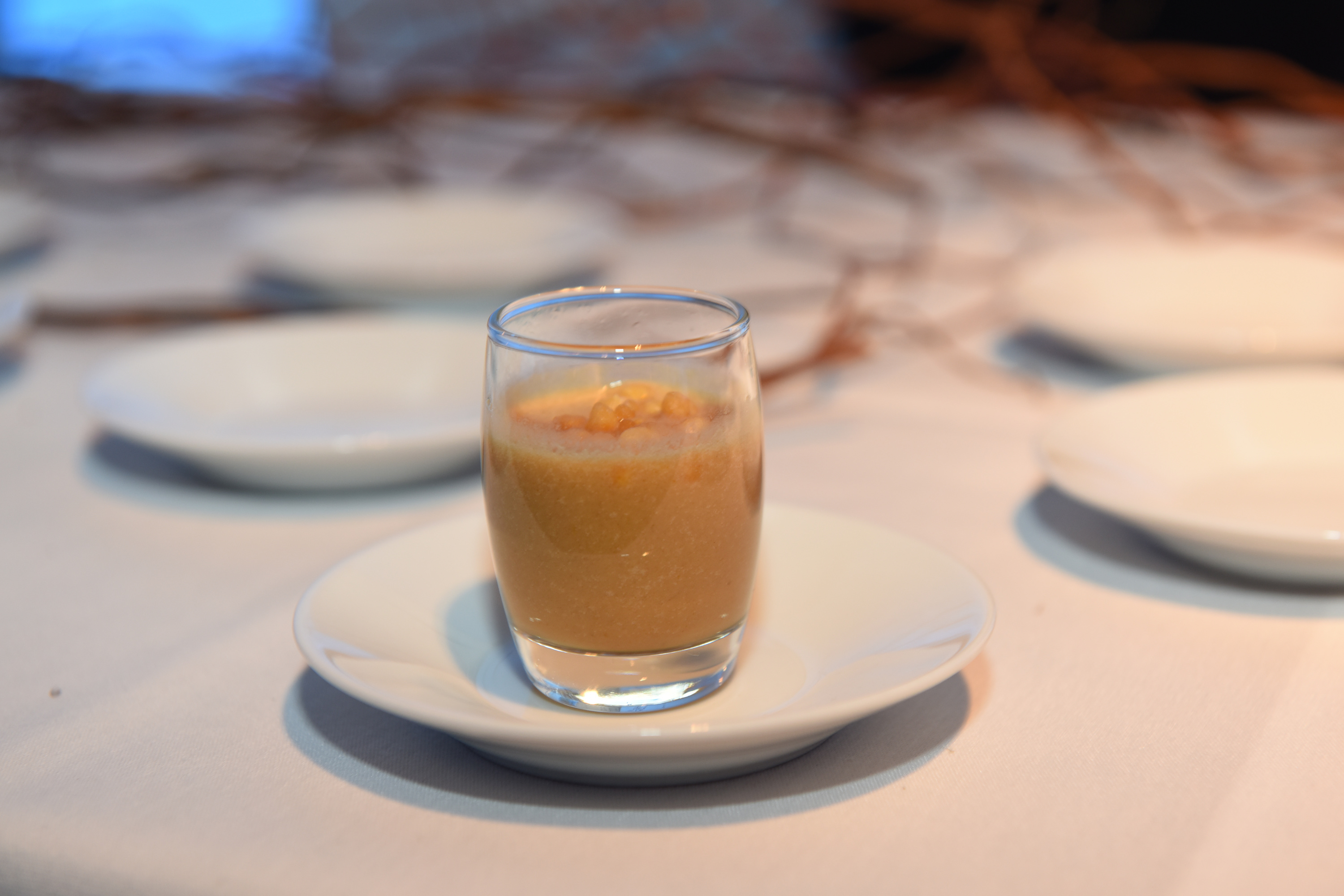 Ivan Orkin of Ivan Ramen made a fresh and delicious Pickled Sweet Shrimp with Daikon and Dried Scallop XO sauce: 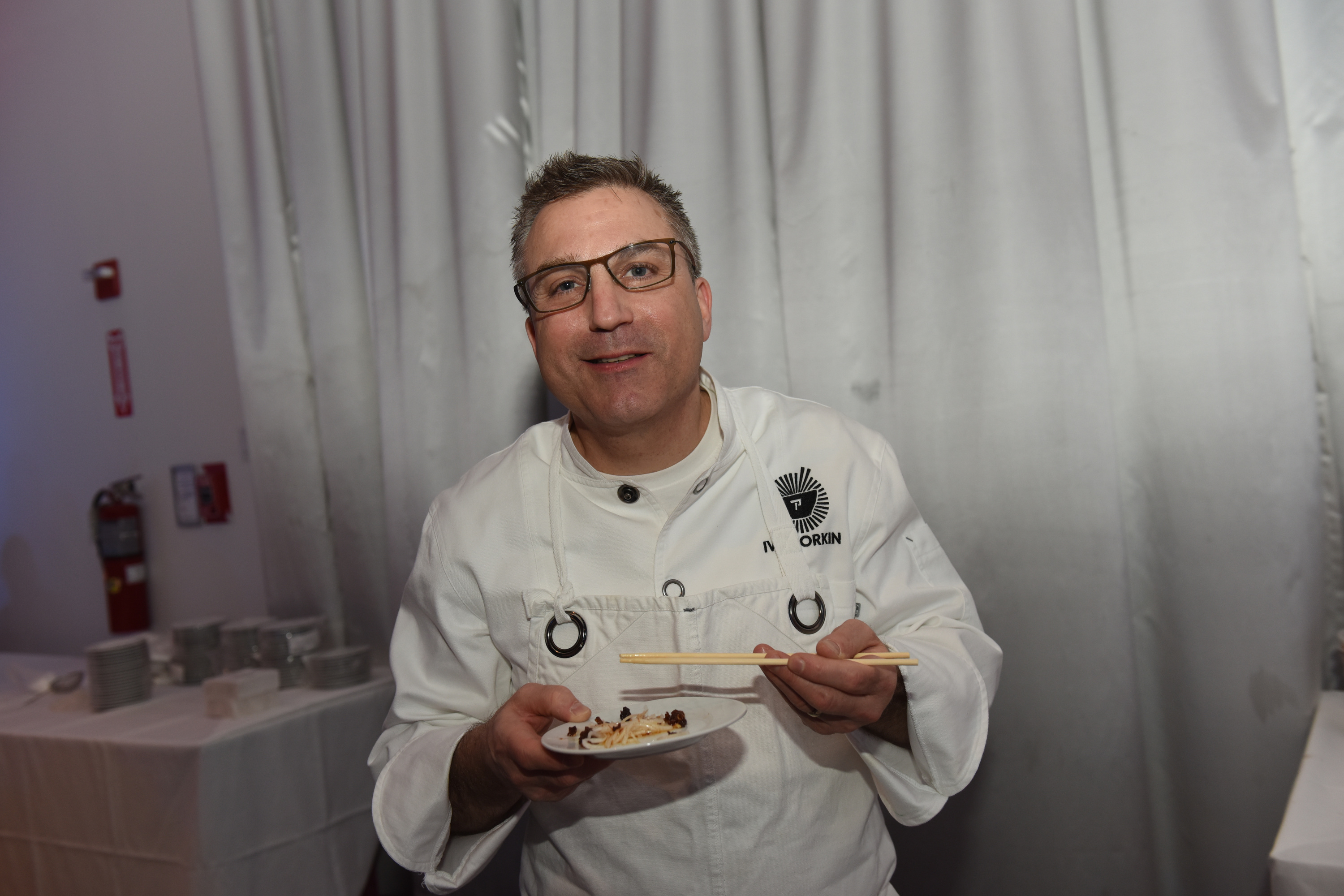 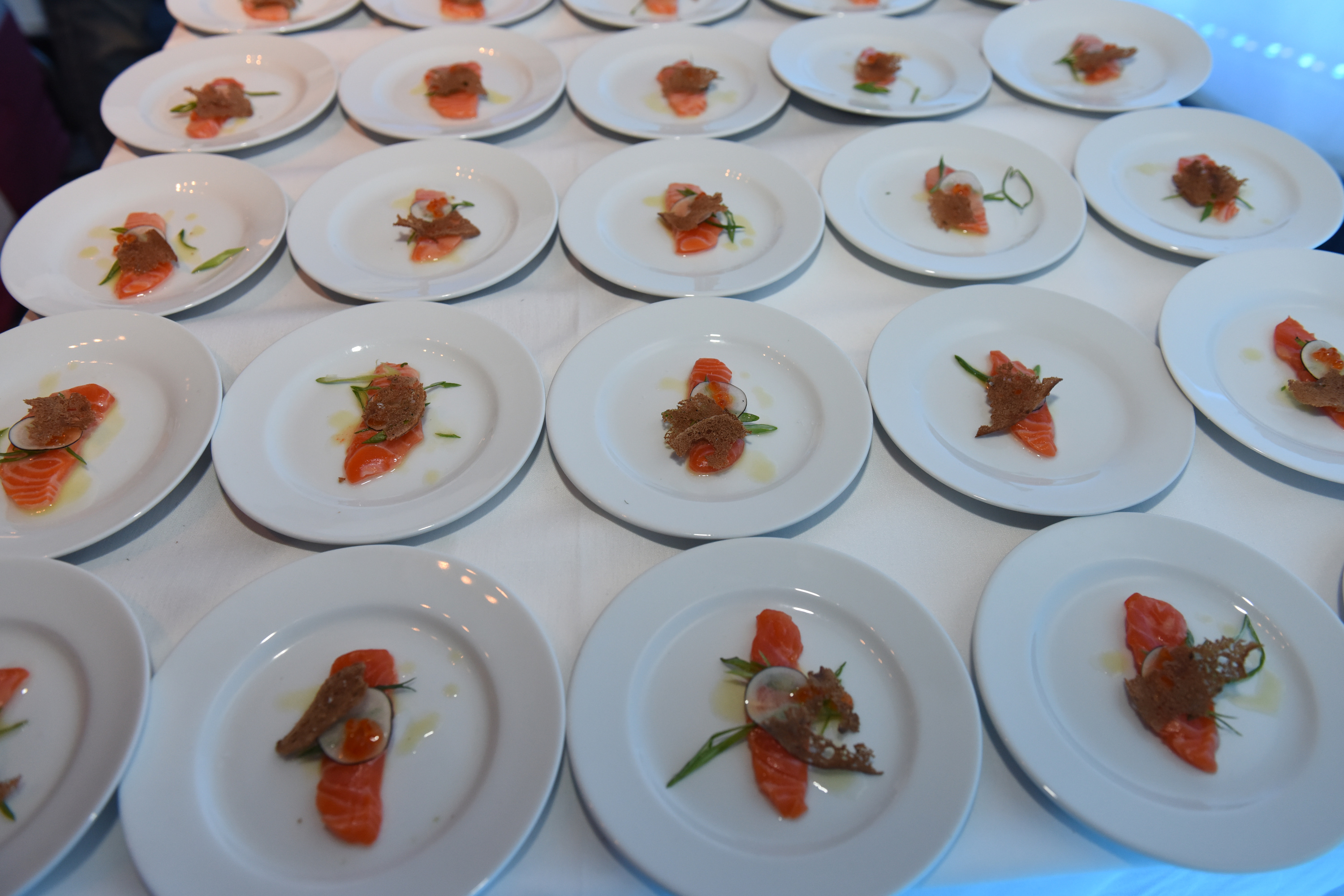 Manish Mehrotra from Indian Accent, Georges Mokbel of Omar’s La Ranita, Alberto Tartari of Il Baretto, and Hugue Dufour of M. Well Steakhouse was there. It was good eating, good drinking, and a great time. And, guests got to take home a copy of Something to Food About, Questlove’s new book, released this week: 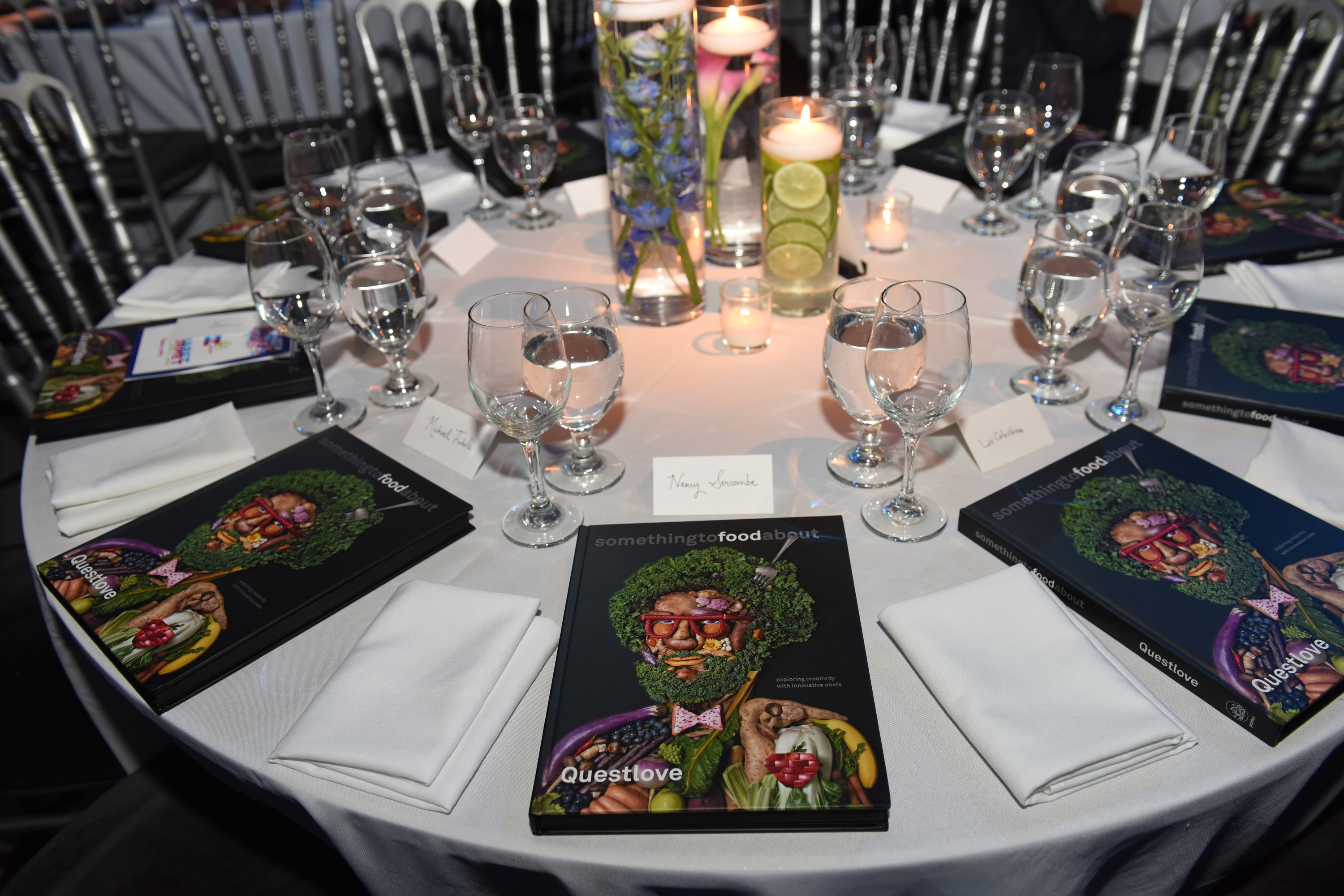 The very next night we got to see him in conversation with Kim Severson for a Times Talks. Questlove continued to be his impressive self, and of course, they talked a lot about food. Here’s what we learned about him:
Favorite Food on the Thanksgiving Plate: Cranberries
Favorite Cereal: Peanut Butter Cap’n Crunch
Last Meal on Earth: Max’s Steaks in Philly, with “the oil burning through the bag.”
Does he think his chicken is actually better than David Chang’s? “So, how bout those Mets?”
[Image via David Handschuh]
–