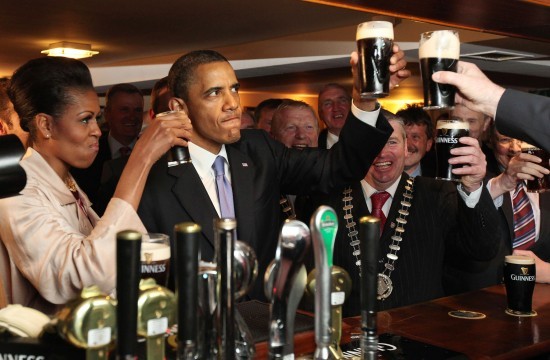 Ever since the country found out that President Barack Obama not only brewed his own beer (or rather, had his kitchen staff do that for him), but also carried the beer with him on the campaign trail, the grubby Internet masses gathered together in the dark, huddled around an online forum, discussing among themselves how the Commander-in-Chief might quaff his ale. It’s probably some frou-frou German recipe, they said. We know that there’s honey. There’s hops. They brew it once in a while. If only we could drink the President’s ale. Be like the Big Man. Say, wouldn’t that be something?

Suddenly, some Reddit users remembered that they weren’t vagrant, Dust Bowl-era hobos, but people with computers who lived in an era where they could file Freedom Of Information Act requests to the White House. One transparency-inclined Redditor in particular sent a letter to a FOIA officer requesting a copy of the recipe for the White House Honey Ale.

“Disclosure of the requested information to me is in the public interest because it is likely to contribute significantly to public understanding of the operations or activities of the government and is not primarily in my commercial interest,” he wrote very seriously, before adding “Also, if you could send me a copy autographed by the President, you’d be the coolest FOIA officer in the whole federal government, and who could resist that title?”

Since the letter was posted on Reddit, it became an internet sensation, so much so that the Main Stream Media asked White House Press Secretary Jay Carney to comment on whether the President would be releasing the recipe.

“Not that I’m aware of,” he hedged, probably expecting a question about the Ryan Budget, but giggling when the reporter started demanding transparency for the American people. “I am not aware of any plans at this time to divulge, the secret…I’ll have to take the question, examine it, taste it…”