Will Bourdain, Lawson, And Lefebvre Return For The Taste Season Two? 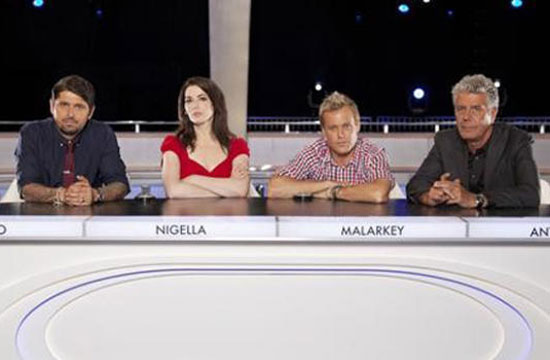 This morning,The Hollywood Reporter broke a story best described as shocking, in the violent, near-death sense. The widely panned ABC cooking competition The Taste got renewed for a second season. Never mind its progressively plummeting ratings, from its record-breaking, two-year-high premiere ratings to its sad, ignoble end. Never mind the fact that the entire set seemed to suck the souls right out of the normally charismatic celebrity judges (except for Brian Malarkey, more aesthetically-pleasing cyborg than man). Never mind that they achieved the impossible and made Jose Andres’ laugh sound empty and meaningless. The show will be back, and it’s prepared to serve its audience one weird-looking spoon of ennui at a time.

But what about the judges? Although Anthony Bourdain and Nigella Lawson served as executive producers on the show, neither Eater nor The Hollywood Reporter mentioned if the pair would return, nor did they have any news about Malarkey or Ludo Lefebvre (once deemed the potential “breakout star” of the show by the New York Times).

Let’s assume they don’t come back. Bourdain’s already given a verbal eye-roll at the show’s producers and crammed his schedule with more episodes of Parts Unknown. Lefebvre could do it, but recently opened a new bricks-and-mortar restaurant in Los Angeles. We can’t see Lawson returning without “her boys” (and we refuse to dub her the Randy Jackson of the group). Malarkey…well, he’d only refuse if physically restrained.

But there must be four judges. We could joke and say that the judges from American Idol need new jobs (and yes, we would enjoy watching Mariah Carey eat human food) — but no, The Taste needs chefs. And they need chefs who fit the archetypes set by these four, but without the pricey contracts set by their agents. So who, then, is the poor man’s original The Taste judge?

We would never insult Adam Richman or Andrew Zimmern by suggesting that they take on the role of drunk, well-traveled grouch, but in the reality tradition, the show needs a Simon Cowell. We nominate John Tesar — just as old, but not as quick with the witty insults. Perfect for America.

Playing the role of “sexy foreigner with exotic accent”: Stefan Richter, who certainly has the swagger, if not the thick, luscious head of hair, nor an angular jaw swathed in stubble.

No one can really replace our elegant, sensual cannoli, but reality shows always dictate that the skankier the lady judge, the higher the ratings. As much as it pains our feminist hearts…Nadia G.

Okay, no, he can’t leave. Malarkey will be the Randy Jackson, The Taste’s stalwart fixture, the forever judge, preserved like a mosquito in amber or silicone. He will look exactly the same by the end of the 15th season as he did during the series premiere.

“But how did you do it, Malarkey?” we’ll ask, wonderment creeping into our voices.

He’ll laugh with a mouthful of gleaming teeth, his forehead unmoved by any show of emotion, and wait patiently for his time to run out.

[The Hollywood Reporter via Eater]