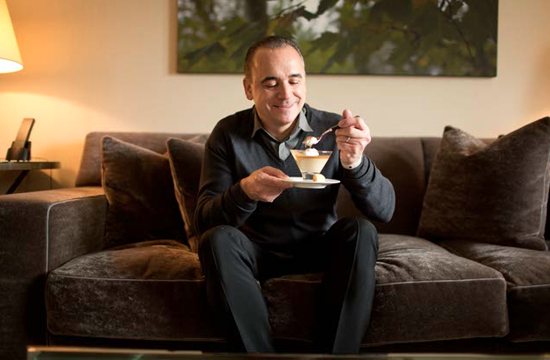 If you are a restaurateur whose apartment got flooded in the recent superstorm, here is a formula to having the most comfortable post-Sandy experience in New York City:

First, be part owner of a posh hotel in the Upper East Side.

Second, own the restaurant in said posh hotel.

Third, leverage this to get the best room service in the world.

There’s only one person who can really have that experience, then. After his apartment above his Perry Street restaurant became uninhabitable, Jean-Georges Vongerichten moved to The Mark Hotel, where he is currently staying and where he also has (surprise, surprise) another restaurant which provides room service for the entire building.

A writer from Bon Appetit had a slumber party with Vongerichten and his family in their two-bedroom suite at the hotel, where he learned, among other things, what having your own restaurant providing you room service actually means:

Lately, Vongerichten has been ordering two things. First, a whole roast chicken that’s brined in a kombu solution and served on a bed of french fries with a lemon pepper sauce. Then, dessert: whipped cream with salt, caramel, and a layer of butterscotch. I didn’t ever expect to hear JGV say “sick!” in reference to anything, but this dessert helped prove that the man is full of surprises.

But the best part of ordering in from your own restaurant? “I’ve never had such fast room service in my life!” He is Jean-Georges, and you are not.

Ah, to be Jean-Georges; to eat the finest of foods on the plushest of beds; to use the oddest of slangs and impress Bon Appetit.