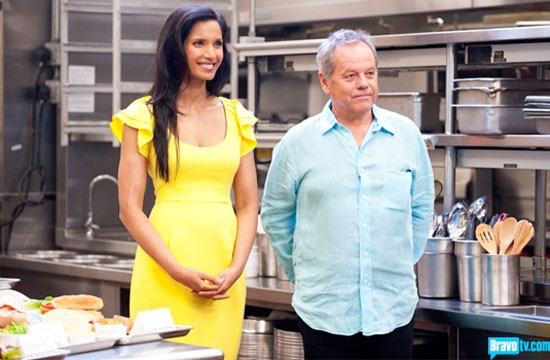 With one week to go until the season premiere of Top Chef Seattle, we sat in on a conference call with the newest Big Name Judge at the Judges’ Table: Wolfgang Puck. Though he was reticent to talk much about the outcomes of the season (a million dollar non-disclosure fee will do that to you), the world-famous chef spilled about some of the guest judges making appearances this season, as well as his surprise that chefs nowadays have a tenuous grasp on the fundamentals of cuisine.

(Please allow us a moment while we geek out about the prospect of the cheftestants visiting Nathan Myhrvold’s lab. Okay, we’re done.)

And you’ll be surprised to hear who his favorite Top Chef alum is, so read on!

Can you talk a little bit about what appealed to you about Top Chef as far as joining the program and just sort of how it will be, it’s been around for a while now, how it will be fresh this coming season?

Well, I think there’s always new contestants and there are a few new guest judges and so on. I think it’s really very interesting the choices they make when they select the chefs, so it’s always interesting to see. And sometimes when I read where people come from you say, “Okay this one should win or that one should win.” And then at the end, under that pressure, it’s different to perform than cooking in a restaurant. Well, [in a restaurant] you are pressured too, but it’s a different kind. So I think it’s always exciting to see how people come along and [go] to different places where they are not used to. It’s certainly stressful.

Ok, and as far as your involvement with the program?

Well, I like to be a judge. I think it makes it easy for me because I don’t really have to cook, you know, I just have to taste and give my opinion or judge them. So I think it’s always fun to see the young chefs, you know, seeing them being all nervous, being all worked up and they’re tired and so on, but they have to perform and sometimes they do really well and sometimes people make things — silly mistakes where you say, “What happened today? Yesterday it was so good. Today what happened?”

What was your favorite part about Seattle’s culinary scene? Was there a certain restaurant or neighborhood that you visited that really inspired you?

You know what? It’s really interesting for me to go to different places and see different things and what’s going on. Unfortunately, I did not spend a lot of time there. I went one night. We went to see Nathan Myhrvold in his laboratory out there and that was about as much as we went out there. So I think, and I know Seattle has a lot of great restaurants and everything, so I think I’m just going to have to spend more time there. Even – we do some catering out there, but I rarely go now.

Did you have any sort of relationship with any of the judges on Top Chef before becoming a judge yourself? And what was your interaction like with them?

Well, a lot of them I’m really friendly with because they’re all chefs in restaurants. You know, I think the interesting thing was we had two chefs from Animal and Son of a Gun, two small restaurants here in L.A. and I never went to their restaurants, so we actually met for the first time there. And then, Emeril I’ve known for many, many years and so we did many events together and so on.

Did you find that any of the contestants who had culinary training or an education from a school had any sort of advantages or disadvantages compared to other contestants?

A lot of time, when contestants work in one or two very good restaurants, they actually learn the dishes they do at the restaurant, but they don’t learn the basics. You can tell them, “Make me a good tuna sashimi” or, God knows what, but if you tell them to tell them to cook an egg right, all of the sudden, they get nervous. And I think that’s why I really believe that cooking to learn the foundation is the most important part.

And that’s something you saw in filming the show?

Yes, I saw that there were a lot of talented people who did great dishes, but a lot of them also lacked fundamentals.

What was the most unexpected part of being a judge on Top Chef?

Wolfgang Puck: I think the most unexpected part was really for me the first episode. And I think when you’re going to watch it you’re going to know why because I really thought that a lot of the chefs who participate, you know, lack a basic foundation.

Like if you’re in France, and Austria, and Italy somewhere and you do an apprenticeship, you learn the basics. And I think here I was surprised that a lot people know how to do recipes, but the basics are very difficult for them, like cooking a perfect omelet.

What behind the scenes aspect of judging do you think would surprise viewers?

There were a few times where I actually changed my mind. I said, “You know what? I gave this person flak and I don’t really think it was right.” So I said, “You know what? I think I’m going to change my mind. I think it wasn’t right because there were too many mistakes.” And I think they all said, “That’s OK. You know what? If you feel like that now, we’ll just shoot it that way.” And they did. But mostly it is us talking about the food. We talk about what we had and so on, but it’s not really anything out of the ordinary. What it is really is a lot of waiting around.

What do you think makes for a world class chef? Do you think it’s the palate, the artistry, or the imagination?

You could ask that for any profession. What makes a world class musician? There are many different musicians out there who are world class. To me, a world class chef has to have, obviously, his own ideas and his own path, and his own style, just like a world class artist. You know, I could paint a mural like Picasso if I would apply myself and, you know, work a lot on it, but they did it first. And I think in cooking, it’s the same. To me a world class chef is a guy who has a great palate, but he has his own idea and he has people who can execute them perfectly.

We were wondering how you felt a young Wolfgang Puck would have done as a contestant on Top Chef?

I was thinking about that a few times when I was the judge. I actually did Iron Chef maybe eight years ago or something like that — seven years ago. It really would depend really at what time of my career. Don’t forget, I started to cook professionally when I was 14 years old.

So by the time I was 24 I already [cooked] for 10 years in some of the best restaurants in the world. So I think even at that time I could probably measure up, yet it’s a different level now, it’s a different playing field. I mean, at that time in America you did not have as many talented young chefs and young chefs who worked hard and are really, really, really good at it. So the competition was less, but nevertheless there was a competition. And I think you can feel the competition. When I was 25, I was a chef in a restaurant called Ma Maison. And, you know, it’s a competition to get every customer to come back, too.

But I think I would have done pretty well because I always had a good instinct about food, you know, and I always was very clear about using great ingredients.

Do you have any favorite Top Chef alumni?

Yes, the one with the beard.

With the beard, yes, exactly. I thought he did very, very well. I still remember the fish he cooked at the Top Chef show and we went to his restaurant and he is doing a great job. And he is cooking food with strong flavors and, you know, he has a big wood burning grill, which I love too, so I think he is one of the good ones.

If you could design a challenge for [the cheftestants] to go through, and one would be eliminated by the end of it, what would that challenge be for you?

Well, my challenge would be for them to go back to the basics and do some really simple things, which a lot of people really don’t know how to do anymore today — like make an omelet, making scrambled eggs, making a really good chicken soup, or fried chicken. Something really basic without going out and being so inventive. And I think a lot of people really are not that good at that. They are good at cooking good recipes, but I think a lot of young chefs today forget about the basics.

This interview has been edited and condensed for clarity.