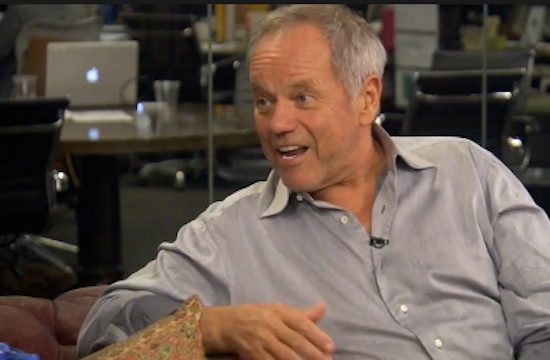 According to Wolfgang Puck, if you cannot make a proper omelette, you don’t belong on TV.

Puck stopped by HuffPost Live to talk about his new cooking appliance (an oven? we sort of spaced out), and then laid into the Top Chef chef-testants for not even know what the f*ck they’re doing. He has no qualms calling out some of the chefs for not knowing how to cook. From the interview:

“I remember one of the shows we did, I had six chefs… and I had them make an omelette,” he recalled. “Nobody could do an omelette. I would not have served any of their omelettes in our restaurants. It was terrible. I said, ‘You guys are chefs?’ I asked the producers, ‘Can we fire them all?’… It’s amazing how sometimes the people cook terrible food.”

Ooooh boy. Then again, much of that blame should fall on the producers, no? Puck called the casting of the show “interesting,” which is code for “shitty and pandering to a TV audience.” Mmmmk. Granted, this isn’t the first time that Puck has been less than impressed with the Top Chef contestants; he told us the same thing back when Top Chef Seattle was premiering:

Well, I think there’s always new contestants and there are a few new guest judges and so on. I think it’s really very interesting the choices they make when they select the chefs, so it’s always interesting to see. And sometimes when I read where people come from you say, “Okay this one should win or that one should win.” And then at the end, under that pressure, it’s different to perform than cooking in a restaurant. Well, [in a restaurant] you are pressured too, but it’s a different kind.

He also said that the cheftestants learn how to make certain dishes that they serve in their restaurants, but not the basics — hence why no one knows what they’re doing on Top Chef.

Puck even called out a recent Top Chef Duels cheftestant for totally screwing the pooch. “I had a friend of mine on the last show, Top Chef Duels, and I know he’s a great cook — I won’t say the name — and he made something, … I said, ‘Jesus Christ, he should give up cooking if he cannot cook that thing right,'” said Puck to HuffPost Live. Who could it be? Assuming it’s a man, it’s slightly easier to track down his friend going through our recaps …