World Learns Anthony Bourdain Is Half Jewish, Has Heart Attack 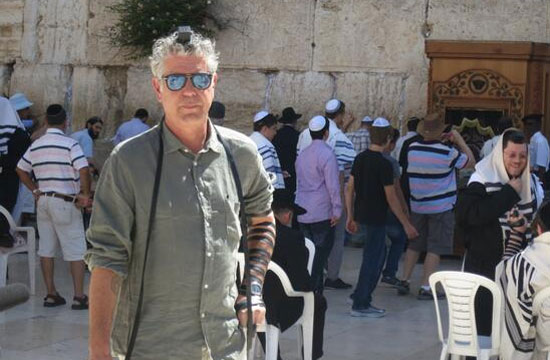 At the very beginning of what he promised would be a controversial episode of Parts Unknown, in which he covered the Israeli-Palestinian conflict, Anthony Bourdain mentioned that he was half-Jewish on his mother’s side (and got roped into an impromptu Bar Mitzvah at the Wailing Wall, seen above).

That might have ended up being the most shocking moment of the night and made headlines in multiple publications, with The Times of Israel reporting on this revelation in uncharacteristically large red font (“TV chef Bourdain reveals Jewish heritage during show in Israel“). In fact, we may have seen more surprised tweets about Bourdain’s heritage than anything attacking him as an Secret Israeli Muslim Lizardman Apologist (or the like), as he predicted.

Bourdain admitted that, despite having a background half Jewish, half Catholic (“I think”), and completely atheist, he was still unsure of what to make of his ancestry: “I’ve never been in a synagogue. I don’t believe in a higher power. But that doesn’t make me any less Jewish, I don’t think.” Coincidentally, that’s probably the most Jewish aspect about him: a recent poll found that half of American Jews doubt God’s existence. (Only ten to fifteen percent of the general population admit to being atheist.)

The other Jewish aspect? Technically, since his mother is Jewish, he could become an Israeli citizen if he wanted to. But we digress.