Would You Like To Learn More About Spanish Cuisine? If So, José Andrés Wants To Give You Money 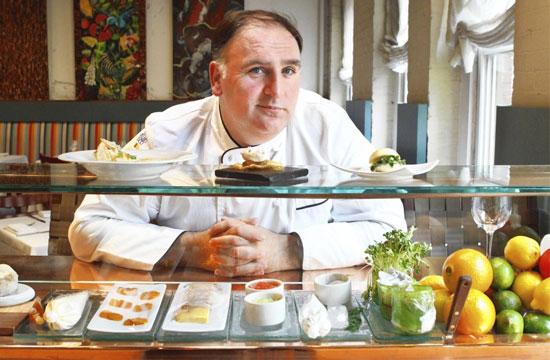 José Andrés is a culinary Santa Claus, sans beard. Not only do his eyes twinkle, but he’s blessed with dimples so merry, and a tummy that shakes like a bowl full of arroz con leche, he’s also giving three culinary students the opportunity of a lifetime: The International Culinary Center announced today that they will offer three scholarships to the newly-formed Spanish Culinary Arts program, where Andres serves as dean.

Two of the scholarships, offered by Andres’s ThinkFood Group and the Campofrio Food Group, will cover the entire tuition — $26,500 — of the program. The third, from Sam Nazarian, covers only $20,000, but hey, it’s free money during the student debt crisis.

“The scholarships will be awarded to three students who are passionate about cooking and more importantly, passionate about learning about Spanish cuisine and culture,” Andrés said in a statement. “These scholarships, in launching the careers of three deserving students, will translate into millions of dollars spent over a lifetime on food products from Spain as well as millions indirectly generated by creating jobs here in America and abroad.”

Andrés initially started the program not only to introduce Spanish cuisine to a new generation of American chefs, but also to bolster and save his native cuisine amidst a faltering economy that’s shuttered restaurants across his native Spain. Part of the curriculum includes a weeklong trips to Spain, which the scholarships also cover.

Applications are due by January 18th, and the program begins on February 8th. Information on the scholarship, including how to apply, can be found here.