WTF is This Taco Bell 'Breakfast Phone?' A Twitter Summary

WTF is This Taco Bell ‘Breakfast Phone?’ A Twitter Summary 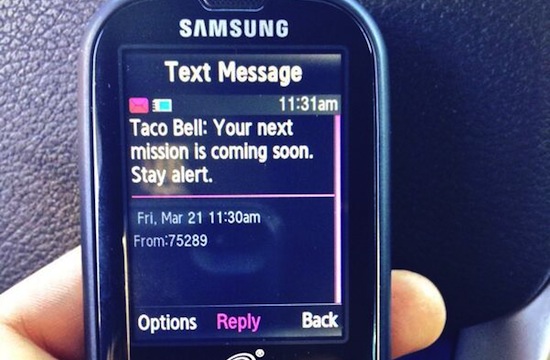 When we noticed some very bizarre Tweets floating around the Twitterverse this weekend, we were like, yes: a “breakfast phone” is exactly what we need. A phone that calls in our much needed bacon, egg, n’ cheese (on a roll! always on a roll!) and large cup of coffee whenever it’s needed. And then we realized that it was a Taco Bell stunt and we were like NOOOOOOOOOOOOOOOOOOOOO.

But for real, WTF IS THIS THING. Consumerist has the scoop, that the chain basically sent 1,000 free “breakfast phones” — actual cell phones — to “fast-food influencers” to go on “secret breakfast missions.” TACO BELL, THOSE THINGS ARE NOT THINGS. And then it became a social media contest for weird Taco Bell fanatics to win one, because who wouldn’t want a phone from 2004 to get a Taco Bell breakfast?

Still, we got a kick out of reading Tweets from those who actually received a phone, and those dying to get one. We’ll stick with our Seamless app, thanks.

This @TacoBell #BreakfastPhone is amazing. It makes/receives calls, comes with its own charger and slides to reveal a keyboard. #humblebrag

(Editor’s note: ANYTHING?!!? Save that promise for something WORTH IT.)

Having the @TacoBell #BreakfastPhone feels like waiting for Avon Barksdale to call you on the burner. pic.twitter.com/OCcTxuB7HS

And those lucky bastards even got waffle taco PJ’s.

Waffle Taco Pajamas exist. You’re welcome. If you have a #BreakfastPhone, you could win these pajamas. pic.twitter.com/BfkUcJpvT1

Hit her from the #BreakfastPhone to let her know that it’s real.

Not that the Breakfast Phone wasn’t without some problems.

I feel like a damn secret agent with this @TacoBell #BreakfastPhone… what if they ask me to kill?

@TacoBell I have traveled from far lands for 20 years of my life in search of this great #BreakfastPhone which is an item of epic necessity.

In conclusion, breakfast phones are a thing and we are worried for the future of our generation.

RELATED:
Unnecessary Roughness: Taco Bell Patron Assaulted for Not Saying ‘Excuse Me’ After Burping
Taco Bell to Offer Mobile Ordering This Year, God Help Us All
Breakfast Links: The Best Taco We’ve Ever Heard Described to Us, Ever