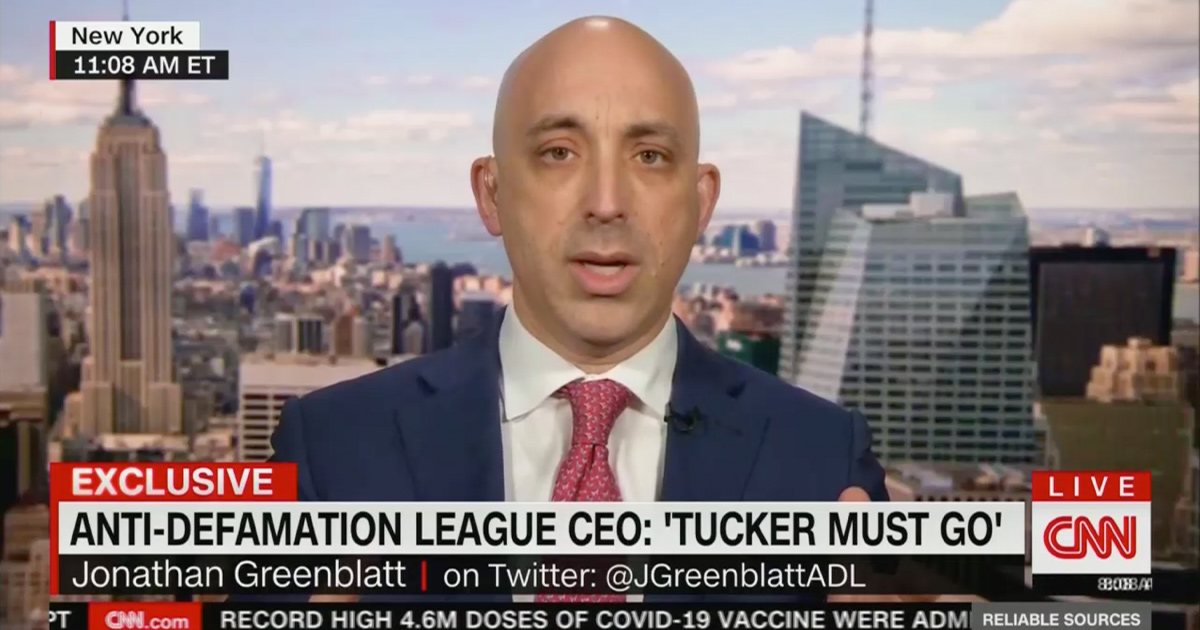 In comments to the World Federation of Advertisers on Tuesday, Anti-Defamation League CEO Jonathan Greenblatt doubled down on his criticism of Fox News host Tucker Carlson, who Greenblatt said has “openly endorsed” what he called the white supremacist “Great Replacement Theory.”

Greenblatt spoke to the WFA for about 15 minutes, according to the ADL. He criticized social media companies, including Facebook, Twitter, YouTube, and others, for enabling the spread of “propaganda, disinformation, and hate.”

He also re-upped his previous criticism of Carlson and Fox News.

“Just two weeks ago on his Fox News program, Tucker Carlson openly endorsed the white supremacist ‘Great Replacement Theory,’” Greenblatt said to the WFA. “If you haven’t heard of it, this is a virulently racist and antisemitic conspiracy theory that holds a secret group of Jewish people are plotting to flood the United States with non-whites and immigrants in order to commit ‘white genocide.’”

“This is not a new idea,” Greenblatt also said. “In fact, it is a longstanding, toxic stable of white supremacist ideology. And yet, in front of the largest primetime audience in America, Mr. Carlson asserted this was happening because the Democratic Party intentionally was engineering a huge influx of immigration to bolster its voter base.”

In his remarks, Greenblatt pleaded with the WFA to consider the role of advertisers in stopping “how hatred is being mainstreamed in America in 2021,” and telling them they have a “potential role to play.”

“Through your advertising muscle, you have a distinct and powerful voice in what information networks like Fox and Facebook will and will not allow on their platforms,” Greenblatt said. “You can hold them accountable like few other actors in society because your dollars are the fuel that enables their business model.”

Greenblatt said that advertisers could apply “revenue pressure” and “reputational pressure.” He said that they “indisputably have a kind of power,” and said that nothing less than “the future of democracy, the nature of society, hangs in the balance.”

“As an industry, you are uniquely positioned to push these networks – whether mass media or social media – to do their utmost to ensure that hatred and conspiracy theories are not amplified. Yes, the First Amendment allows for people to espouse fringe theories – but we need to keep them on the fringe.”

“Commit to this fight,” Greenblatt urged. “Choose a side. Choose to pause or even pull your ads, not just from problematic programs, but altogether from networks that don’t respect all people or that repeat baseless conspiracies that endanger all of us.”

On April 8, Carlson, appearing on Fox News Primetime with guest host Mark Steyn, said that “the Democratic Party is trying to replace the current electorate, the voters now casting ballots, with new people, more obedient voters from the Third World.” In a tweet, Greenblatt said that “Tucker must go,” and reiterated that position in a letter to Fox News Media CEO Suzanne Scott.

Following Carlson’s remarks and Greenblatt’s criticism, Fox CEO Lachlan Murdoch sent the ADL a letter defending Carlson. Murdoch said he “abhors antisemitism, white supremacy, and racism of any kind,” and pointed out that Carlson said his comments were about a “voting rights question.” A group of ultra-conservative rabbis also defended Carlson.

According to its website, the WFA is “the only global organization representing the common interests of marketers,” and is “the voice of marketers worldwide.” It has more than 8,000 members and connects global brand owners and national advertiser associations in more than 60 markets.

Fox News has been the target of multiple boycott efforts, which have yielded mixed results. In February, Fox News Media reported a quarterly advertising revenue increase of 14%, primarily due to “record political advertising revenues at Fox Television Stations, continued linear and digital growth at Fox News Media,” and consolidation of the Tubi streaming service.