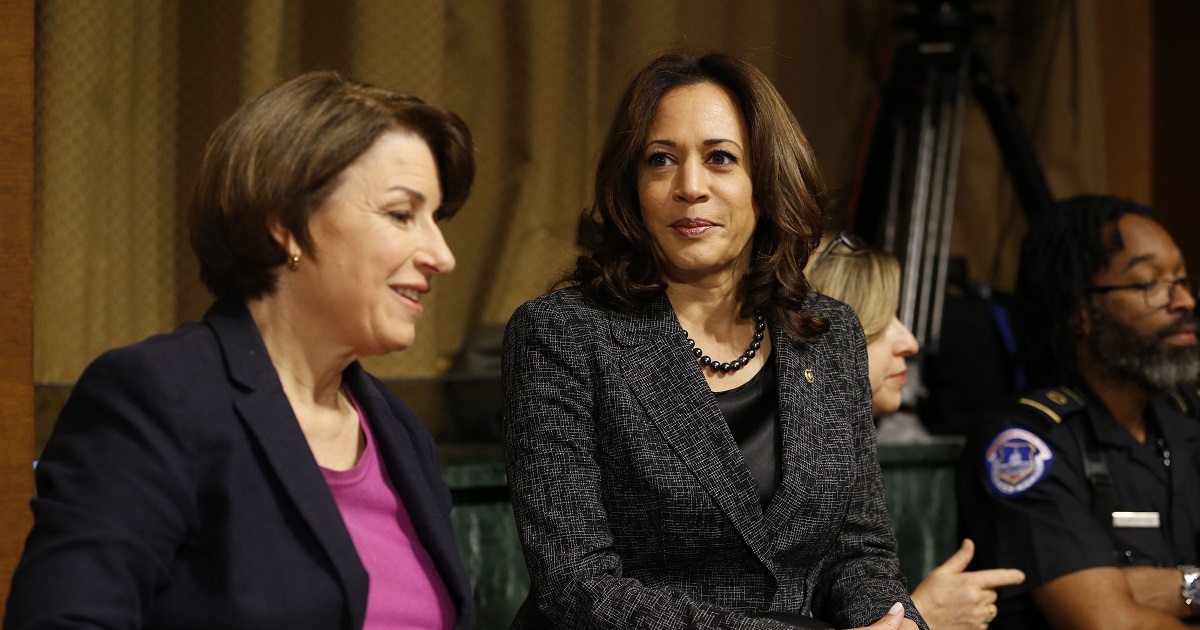 Minnesota Senator Amy Klobuchar effectively ended the Joe Biden veepstakes when she withdrew herself from consideration and endorsed a woman of color for the job, clearing the way for Kamala Harris and providing Biden with political cover not to select Elizabeth Warren.

On Thursday night’s edition of MSNBC’s The Last Word with Lawrence O’Donnell, Sen. Klobuchar dropped out of the running for the veep slot, telling host Lawrence O’Donnell “I truly believe, as I actually told the vice president last night when I called him, that I think this is a moment to put a woman of color on that ticket.”

The reasons she gave were heartfelt, including her own desire to focus on healing her state in the wake of the police killing of George Floyd, but the timing of this announcement doesn’t seem to be pure coincidence.

Former Vice President Biden has been sending strong signals in Harris’ direction for a very long time, but as the veepstakes progressed, he also signaled it was a wide-open contest among the dozen or so qualified and accomplished women being seriously considered. Many observers became concerned when Biden refused to commit to a woman of color as VP but added a pledge to name a black woman to the Supreme Court, which was seen as a sign he was leaning away from a black running mate.

But my analysis of this at the time, which still stands, was that Biden necessarily could not make that commitment so far in advance without shortchanging the other women on the list, and their supporters. Both politically and substantively, everyone needed to be given a fair look.

This is especially true of Elizabeth Warren, whose supporters felt the sting of a sexist double standard that — notwithstanding the double-edged headwinds that Harris faced — made it important for Biden to at least appear to be keeping his options open.

A long and suspenseful vetting process has other political benefits as well, chief among them being that when Biden’s announcement does finally happen,  it will be his biggest opportunity to seize the news cycle and juice enthusiasm for his campaign among Democratic voters. Timing is everything.

That’s why Klobuchar’s announcement is so momentous. She could have withdrawn and simply said “On with the show,” and knowing her relationship with Biden and her political sharpness, it would be wildly out of character for her to go rogue and box him in on a whim at 10 p.m. on a Thursday night. All of the recent messaging, from Harris to House Majority Whip James Clyburn, has been in the opposite direction: Biden should pick whomever will best help him beat Trump.

But two very important things happened this week that created a political necessity for Biden to achieve cover to pass Senator Warren over. The first was an ill-received open letter to the Biden campaign from Warren supporters that included some dismissive language about the importance of a black running mate, and was accompanied by an even more dismissive comment from one of its signatories.

The other was a virtual fundraiser co-headlined by Warren that raked in $6 million — the campaign’s largest haul to date — that turned the burner up on speculation about her as a running mate. That’s the disadvantage of a long and suspenseful vetting process: the longer someone with significant support is under serious consideration, the harder the eventual sting will be if they are not selected. For months, Harris has been seen as the clear favorite, and an all-white ticket has seemed less and less likely, but this groundswell for Warren rekindled a waning expectation.

Following Klobuchar’s announcement, MSNBC contributor and former senior Hillary Clinton adviser Zerlina Maxwell made a few excellent points, including about the poorly-understood moment between Biden and Harris at a Democratic debate last June.

“It’s a very important factor that the vice presidential nominee has already been tested at the presidential debate stage level,” O’Donnell said, repeating something Biden had told him once before, and added “That sure gives a big advantage to Senator Harris.”

“I do think that particular bit there does give an advantage to Senator Kamala Harris,” Maxwell said, and added that people now view their contentious debate exchange differently.

“What they remember is when she stood up to him and said ‘That little girl was me’,” Maxwell said, adding that “people respected the fact that she stood up to the frontrunner.”

She noted that “At the time, think about how much guts it took to really go to a debate and debate as if you wanted the top job as president, and you were unafraid to stand up to a former vice president and the frontrunner.”

The other thing that’s poorly-understood about that moment is that Biden had it coming. While Biden and Harris may have ultimately agreed on the finer points of busing as it relates to de facto and de jure segregation, the words he used and the alliances he formed at the time were hurtful.

Maxwell also derided the idea of dissecting the relative governing experience of candidates like Stacey Abrams and Rep. Val Demings when the current president is Donald Trump.

“Currently Donald Trump is the president during a global pandemic where he has previously told people to inject disinfectant, and so I’m certainly not going to get into a serious game of analysis about whether or not Stacy Abrams is more competent than that person,” Maxwell said.

There was no lie told there, but while others on Biden’s shortlist may meet the bar for experience and accomplishment, Harris simply exceeds them. It has been my analysis all along that Joe Biden would select Kamala Harris to be his running mate. Senator Klobuchar’s move all but confirms it.