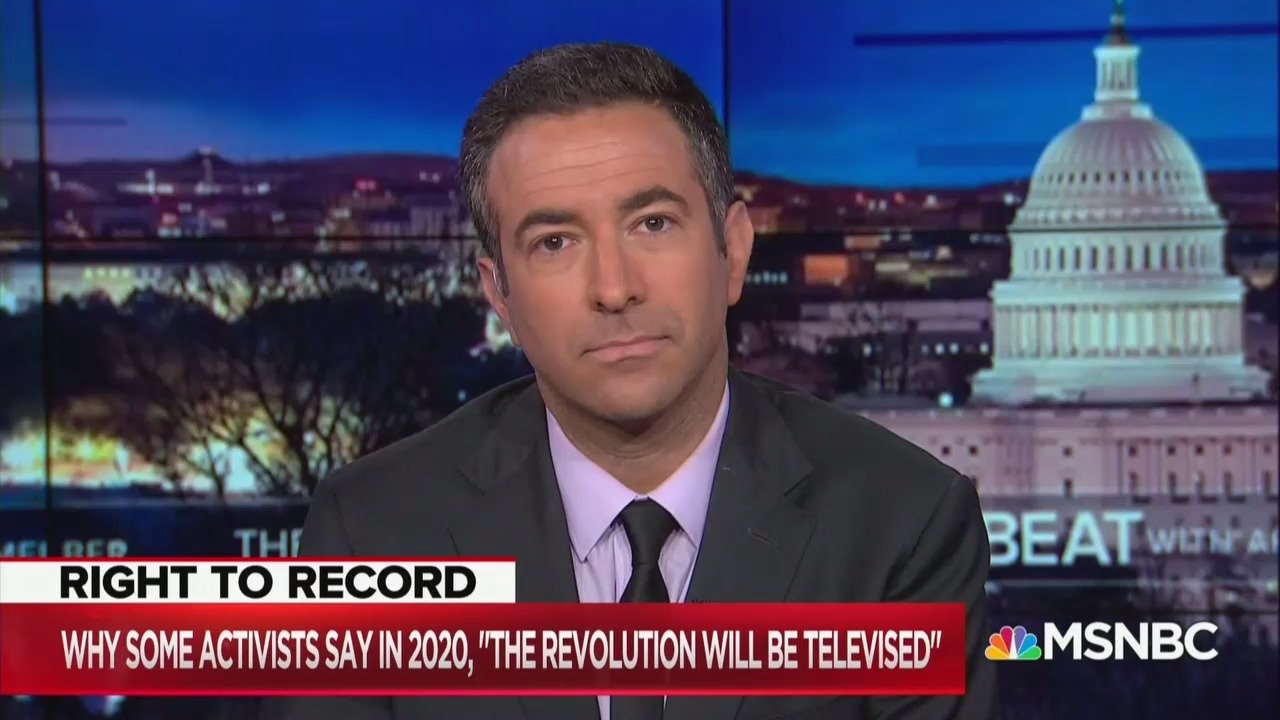 Ari Melber is well suited to the current moment. He’s the anchor of popular MSNBC show The Beat, and an omnipresent legal analyst for the network at a time when such commentary is in high demand. And now, as yet another national news story (this time the presidential election) becomes consumed by legal questions, he joined The Interview to discuss The Beat, the news cycle and what we can expect from election day.

Melber’s idiosyncratic show — which pairs savvy analysis with the occasional rap lyric — has carved out a comfortable spot in the network’s lineup, and distinguished itself with thought-provoking segments like a recent long-form report on cell phone videos exposing police brutality. The Beat picked up an Emmy nomination for a particularly riveting interview with four Trump campaign staffers who served as witnesses for special counsel Robert Mueller’s investigation. The show handily beats the ratings of CNN time slot rival Wolf Blitzer.

Melber’s expertise has come in handy for the network throughout the rolling legal drama that has been the first term of the Trump administration. After the Russia investigation came an impeachment trial, during which Melber hosted a popular Sunday night special on the inquiry that beat Fox News in the ratings — no mean feat in cable news.

Despite that expertise, The Beat doesn’t have an exclusive focus on the law.

“We aim to be a one stop shop for news, politics, law and culture,” Melber says. That diversity is apparent in his other ventures: Melber is the host of Nevuary Radio, a new hip-hop show on Apple Music, and “Mavericks,” an interview show that runs on NBC.com that has featured music producer Swizz Beatz, record exec Lyor Cohen, and director Judd Apatow.

With the November presidential election gearing up to be a mess of legal challenges — Trump has all but declared the process illegitimate and Biden has reportedly assembled a “legal war room” to fight for votes — I called Melber up after his show on Tuesday night to ask what we all have in store for November 3rd.

“The most important thing is that the calendar for the election is in weeks, not hours. There is nothing wrong with taking time to count the votes,” Melber said.

“If it’s a close race, you may go to bed that night without a clear winner, legally, and you may wake up a week later and you could still be counting,” he continued. “And that’s ok. What’s not ok, I think, as a non-partisan, objective point, is voter suppression or interfering with people’s right to vote. Obviously, that’s illegal. It’s wrong. It’s undemocratic. And we have a history of that in this country, including obviously along dimensions of race and racist crackdowns on voting in the Jim Crow South.”

As far as Trump’s own rhetoric on voting, Melber had this to say:

Yes, I think the president has clearly, publicly said that he wants to discriminate voting access in a way that helps him. And as with so many things that this president does, that’s a larger admission than most candidates ever make. So if in the back rooms there are those calculations, rarely are they admitted to because they look bad.

I also asked about his segment on how citizen videos have changed the way the United States sees police brutality. which, in Melber’s words, “documented how the democratization and lower costs of basically video, camera phones, etc. has had a profound effect on this wider effort to document and change the predilection for police brutality.”

The MSNBC host emphasized that his show seeks to cover these stories in a nonpartisan way, ridding them of an ideological framework to just look at the facts on the ground. Regarding police brutality, he explained that such stories should not be considered through a reflexively partisan lens:

Policing, we know, in American history, in many countries, is an inherently controversial topic about power and politics. But let’s be clear: if you heard that there was a bunch of doctors who, instead of doing the job they’re supposed to, were hurting people, you might be sentimentally pro-doctor because you like doctors, or you think most of them are trying to help, or you have doctors in your family.

But if I show you a bunch of videos that are factual — this it what reporting is supposed to do — that they’re actually doing something wrong and they shouldn’t even be doctors, then you adjust your general sentiment, your warmth towards good doctors or nurses. And adjust it for this, based on the evidence. Right? That sounds so straightforward. It’s like, why am I even saying that out loud?

But I think viewers and listeners can probably think about times where even a statement about what the facts are becomes immediately politically contested. Instead of just going, well, wait a minute, what are the facts?

Melber dismissed my observation that the often hyper-partisan nature of cable news reinforces tribalism about such topics, telling me his show seeks to avoid partisanship. And it’s true, his show avoids the singular focus on Trump’s misdeeds that consumes some other hosts on MSNBC.

“I really do just focus on the evidence and the facts as our North Star,” Melber said, pointing out his recent coverage of Daniel Prude, a Black man killed while being detained by police in Rochester — a city with a Democratic mayor.

I also asked Melber about what he thinks criminal justice will look like under the potential Biden-Harris administration. The ticket has been described as the most progressive in history on police reform, and Melber spoke about each candidate’s evolution.

Biden, who “comes out of the 94 crime bill and being what at the time was considered center-right on crime,” now says “the times have changed and so has he.”

Harris, whom Melber has interviewed a number of times, was a “strict prosecutor” but now advocates deep reform.

“Both of them have an argument, or a pitch, that they’ve evolved,” Melber says. “It’s an important time to ask whether you take someone’s pledges as the most important proof, or also how they govern when they had the power.”

We also spoke about rap music, what he makes of Kanye West’s run for president, his dream guests for The Beat, and what concerts he’s going to whenever the pandemic allows for some live action again.

Listen to the full podcast here.