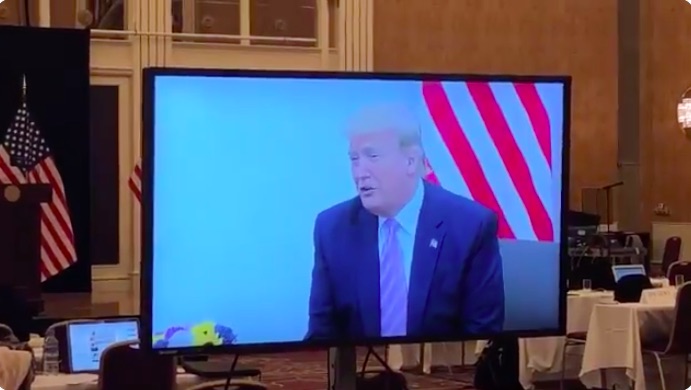 During a side-by-side photo op with Vladimir Putin at the G-20 summit in Japan, a smiling President Donald Trump light-heartedly warned the Russian President to avoid interfering with the 2020 presidential race: “Don’t meddle in the election, please.”

Trump and Putin were sitting in chairs during a one-on-one sidebar at the international conference when a reporter shouted out: “Mr. President, will you tell Russia not to meddle in the 2020 election?”

And this happened: @realDonaldTrump, with a smile, tells Vladimir Putin, “Don’t meddle in the election.” pic.twitter.com/6So2yCrvS2

The cavalier demeanor and throwaway nature of Trump’s comments about Russian political interference in US elections, which a Special Counsel investigation just spent nearly two years investigating and documenting, was striking. It clearly evoked the last time the pair met at a summit in Helsinki in 2017, when Trump publicly sided with Putin in denying Russia’s influence on the 2016 election, contradicting the consensus of the US intelligence community.