Backlash Erupts After Trump Appoints Pence to Lead Coronavirus Response: He ‘Literally Does Not Believe in Science’ 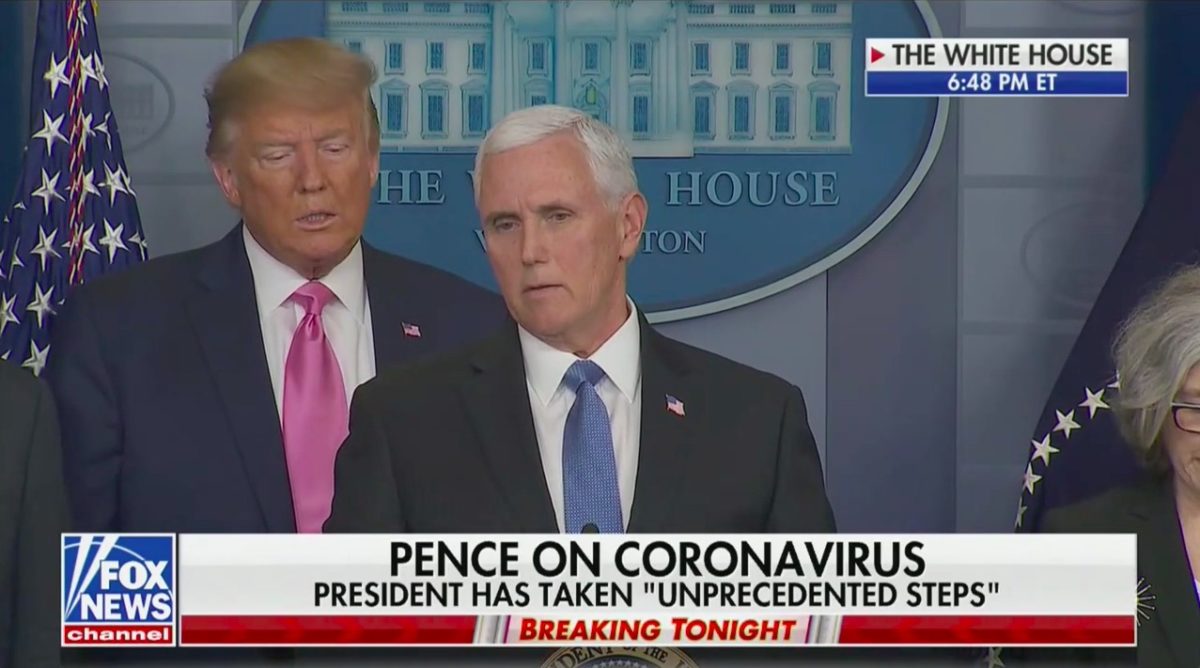 President Donald Trump’s decision to task Mike Pence with heading up the federal government’s coronavirus response triggered an immediate backlash as critics noted the vice president’s record of doubting scientific evidence and his role in exacerbating an HIV outbreak in Indiana while he was governor.

Trump said Pence has “a certain talent for this” and specifically cited the “Indiana model” in the Wednesday evening press conference where he named his VP to run the coronavirus response. But as this extensive New York Times report detailed in 2016, the staunch conservative Pence’s health policies helped ignite a massive public health crisis in his state when he shut down a needle exchange program that had severely curtailed the spread of HIV. Virus infection rates exploded, and Pence — two days after he said he would pray on the matter — relented and reinstated the program.

Pence, who was once a conservative talk-radio star, also has a track record of questioning science, as when he wrote an op-ed in 2000 falsely claiming “smoking doesn’t kill,” decades after numerous academic studies and health research had linked smoking to higher rates of mortality.

That background prompted a number of politicians and public figures express both dismay and alarm at Pence’s role in leading the country’s response to a potential pandemic. Joining the backlash to Trump’s choice of Pence was Democratic primary frontrunner, Sen. Bernie Sanders.

Trump’s plan for the coronavirus so far:

-Cut winter heating assistance for the poor
-Have VP Pence, who wanted to “pray away” HIV epidemic, oversee the response
-Let ex-pharma lobbyist Alex Azar refuse to guarantee affordable vaccines to all

Mike Pence literally does not believe in science.

It is utterly irresponsible to put him in charge of US coronavirus response as the world sits on the cusp of a pandemic.

This decision could cost people their lives. Pence’s past decisions already have. https://t.co/NhMPOusOWm

When Mike Pence was governor of Indiana, his public health record was so stellar that his state policy led directly to a large HIV outbreak.

“He’s got a certain talent for this,” Trump says of Pence, who was just named to lead the government’s coronavirus approach.

As Indiana governor Pence allowed an HIV outbreak in Scott County to spread to epidemic proportions because he slow-walked approval for needle exchanges.

Trump fired the actual experts in pandemic response two years ago and doesn’t trust anyone with actual expertise so now Mike Pence, who wrote columns doubting that cigarettes caused cancer, is in charge of the coronavirus.

Trump just made Mike Pence his coronavirus czar. This is the same exact type of thing he criticized Obama for during the ebola outbreak in 2014. pic.twitter.com/VwPDvcRltv

Mike Pence, who was Indiana’s governor during the worst HIV outbreak in the state’s history, is now in charge of the coronavirus response.

Welp, we had a good run y’all. https://t.co/QMKLG9YJcc

America is a driving force in fighting epidemics, and now the director of that fight is Mike Pence, a guy who’s scientific knowledge consists of how many times you have to pray before you’re cured of being gay.

Pence is in charge?
That’s about as comforting as being gay in Indiana. https://t.co/Hf2lGjZ2Ye

Trump names Mike Pence as the Coronavirus Czar rather than CDC Director Robert Redfield or Surgeon General Jerome Adams. A physician should be in charge of the nation’s coronavirus response, not some dude who quarantines himself from other women when dining out. #coronavirususa

Oh good. Trump is putting @VP in charge of the #CoronavirusOutbreak. Mike Pence, the guy who once said, “despite the hysteria from the political class and the media, smoking doesn’t kill.” Just the perfect man for the job.

My dad (a doctor) had signs in every bathroom in our house that said, “Handwashing prevents infection!” with a teddy bear and a heart. I wouldn’t mind seeing those signs everywhere now. More effective than Pence.