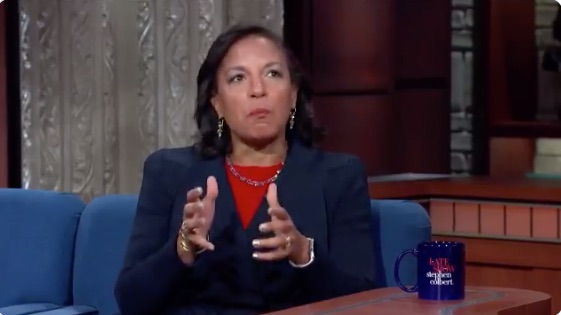 Rice’s condemnation came at the end of a day where Trump saw his own party excoriate his decision as akin to abandoning the US’s Kurdish allies who helped fight ISIS, leaving them vulnerable to a cross-border attack from the Turkish military.

Colbert began his segment by asking the former White House national security aide about her take on the news, and Rice did not hold back.

“Stephen, I woke up this mooring to hear that news and, as I do just about six days a week, I just put my head in my hands. This is just batshit crazy,” she said to applause.

Colbert then asked to offer a bit more context to her rather blunt assessment of Trump’s foreign policy move.

“These are the people, who, for the last four years, have been fighting on our behalf with our equipment to defeat ISIS,”  she explained. “They have done it with enormous efficacy and they’ve sacrificed immensely, and we basically just said to them ‘See ya!'”

“It’s just appalling,” she added. “We promised [the Kurds] our partnership and we promised them that, if they worked with us to defeat our common enemy, but particularly our, the United States and Western enemy, then we would stand with them. And Trump woke up on the wrong side of the bed, it appears, and decided ‘Never mind.'”