Democratic presidential nominee Joe Biden has visited Pennsylvania more since the end of August than all but three states combined.

Highlighting the numbers on Monday, MSNBC’s Mike Memoli noted, Biden has made 26 trips to speak with voters in 10 different states since Aug. 20. Of that number, he has been to Pennsylvania 10 times; Florida and Michigan each three times; and North Carolina, Ohio, and Michigan twice each. He has visited Arizona, Georgia, Minnesota, and Nevada once. He has not visited the other 40.

“When you step back and look at his campaign travel since the Democratic National Convention … 66 days since then, he’s only spent about half of them in public doing campaign events,” Memoli noted in an afternoon segment. “As you do look at that breakdown of that campaign travel, you do see at a number of things. One is spending a lot of time in Pennsylvania.” 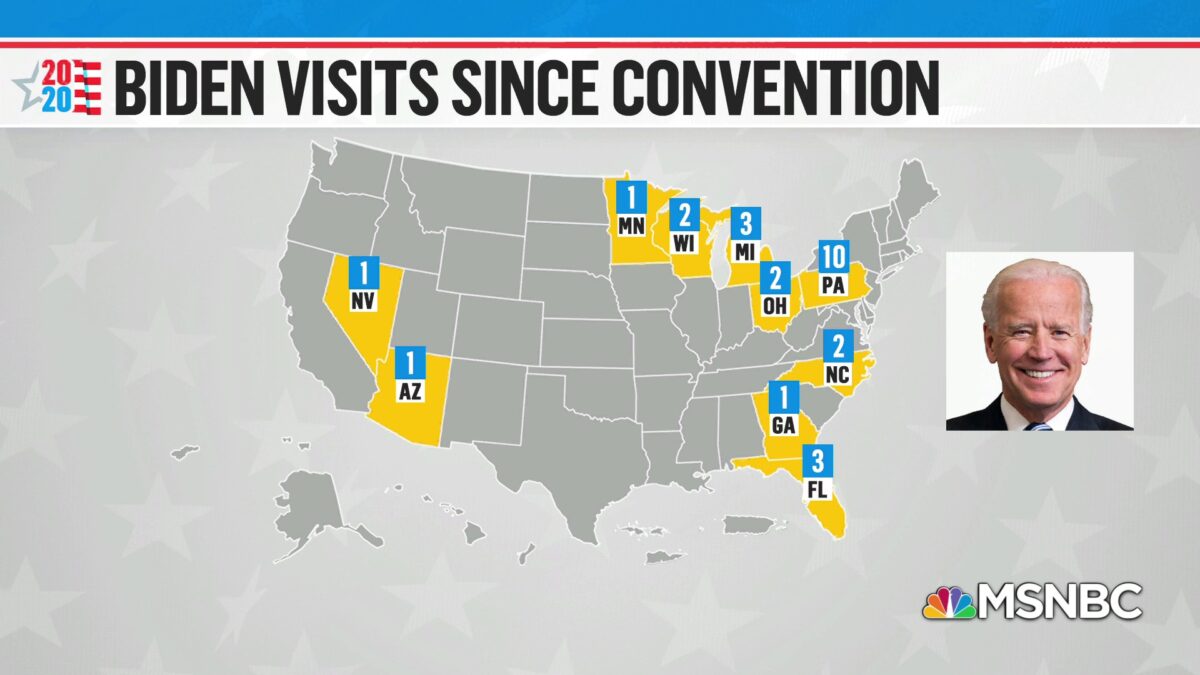 Biden appeared in Chester, Pennsylvania amid Trump’s appearances Monday afternoon to briefly address reporters, despite not having any events scheduled, though it was not enough to satisfy critics. “No events for Joe Biden today??? He’s lid crazy!” senior Trump campaign adviser Jason Miller wrote on Twitter, using a term that refers to the end of a candidate’s day.

The president was in Pennsylvania again on Monday to hold a morning rally Allentown, as well as two afternoon rallies in Lititz and Martinsburg. The state voted for Trump over Hillary Clinton in 2016 by 44,000 votes out of nearly 6 million cast, despite polls generally showing Clinton with a lead in the mid-to-low single digits. Biden has enjoyed a similar polling advantage in the waning weeks of this year’s election.

The president is scheduled to return to the White House on Monday evening to participate in a Rose Garden swearing-in ceremony for Judge Amy Coney Barrett, who is expected to join the Supreme Court. He is scheduled to leave on Tuesday for events in Michigan, Wisconsin, and Nebraska.