Condolences Pour Out Following The Passing Of Broadcast Legend Larry King: He ‘Was One Of The Greats’ 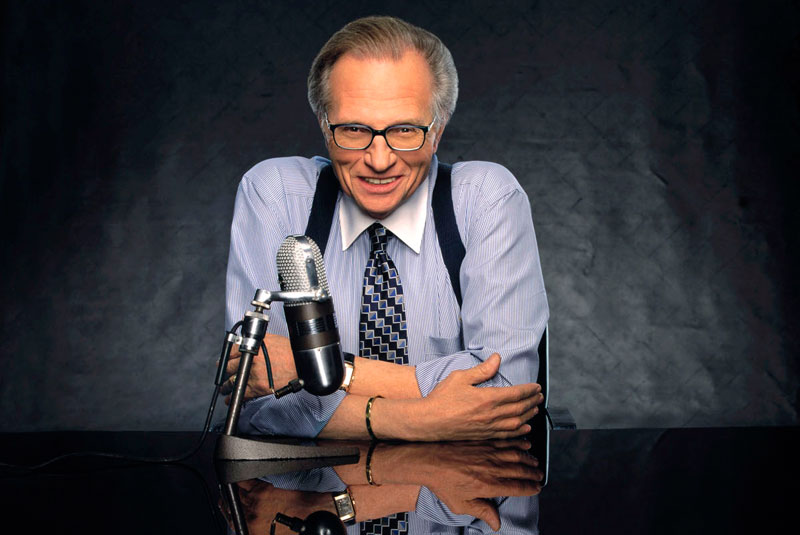 Following the announcement of Larry King’s death at the age of 87 on Saturday morning, an outpouring of condolences were posted to Twitter remembering the larger-than-life television and radio broadcaster.

CNN founder Ted Turner also reflected on the loss of King, who helped to build CNN into what it is today, in a statement emailed to Mediaite.

“Waking up to the news of the passing of Larry King felt like a punch to the gut. Larry was one of my closest and dearest friends and, in my opinion, the world’s greatest broadcast journalist of all time. If anyone asked me what are my greatest career achievements in life, one is the creation of CNN, and the other is hiring Larry King,” Turner wrote in the statement obtained by Mediaite. “Like so many who worked with and knew Larry, he was a consummate professional, an amazing mentor to many and a good friend to all. The world has lost a true legend.”

“It was always a treat to sit at your table. And hear your stories. Thank you Larry King,” Winfrey tweeted.

It was always a treat to sit at your table. And hear your stories. Thank you Larry King. pic.twitter.com/O66uEXeJE4

CNN anchor Wolf Blitzer offered his deepest condolences to King’s family, adding that he hopes King will “rest in peace.”

Larry King was my @CNN colleague and good friend. He was an amazing interviewer and a mentor to so many of us. He loved what he did and all of us loved him. He was a real mensch. My Deepest Condolences to his loving family. May He Rest In Peace and May His Memory Be A Blessing. pic.twitter.com/gIdHbI0knd

Jimmy Kimmel shared that King “was one of the greats.”

When I was a young morning DJ, I listened to Larry King’s overnight radio show every night on my way to work. He was one of the greats and I am glad to have known him “Bethesda, Maryland you’re on the air…”

Many other tributes also were shared, reflecting on King’s legacy:

Because of Larry King, I got the opportunity to guest host his show Larry King Live. What an honor to fill the suspenders of such an icon! He was a great friend of @TheMuppets and the world. Thank you, Larry.

I enjoyed my 20+ interviews with Larry King over the years. He had a great sense of humor and a genuine interest in people. He gave a direct line to the American people and worked hard to get the truth for them, with questions that were direct but fair. Farewell, my friend. pic.twitter.com/Q28Xy4F91W

I’ve known Larry King since I arrived in LA 42 years ago. Larry King Live changed CNN in the 80s blending entertainment with news & I loved being on the show.
Larry was one of the best interviewers on TV. Always well prepared, asked intelligent questions, & always made the pic.twitter.com/kuDOx6gob5

Larry King was a friend through thick and thin. A masterful interviewer and storyteller. He helped put CNN on the map by making news through the art of dialogue.. May he Rest In Peace.

I’m sad to learn about Larry King’s passing.He was such a kind gentleman, and he made all of us feel as though we were speaking with a lifelong friend.There will never be anyone like him, and he will be missed by many. My sincerest condolences to his family & friends. Celine xx… pic.twitter.com/NBw0hpCDoj

Rest In Peace Larry King. What a wonderful life and an iconic career. I’m grateful to have known him. My heartfelt condolences to his loved ones and family ❤️ pic.twitter.com/uz3uavWehj

I remember when I first told people I was going to be a talk show host, one of my friends laughed and said, “What do you think, you’re going to be Larry King?!” The fact that he thought that was a hilariously unattainable goal, shows you what kind of a legend #LarryKing was.