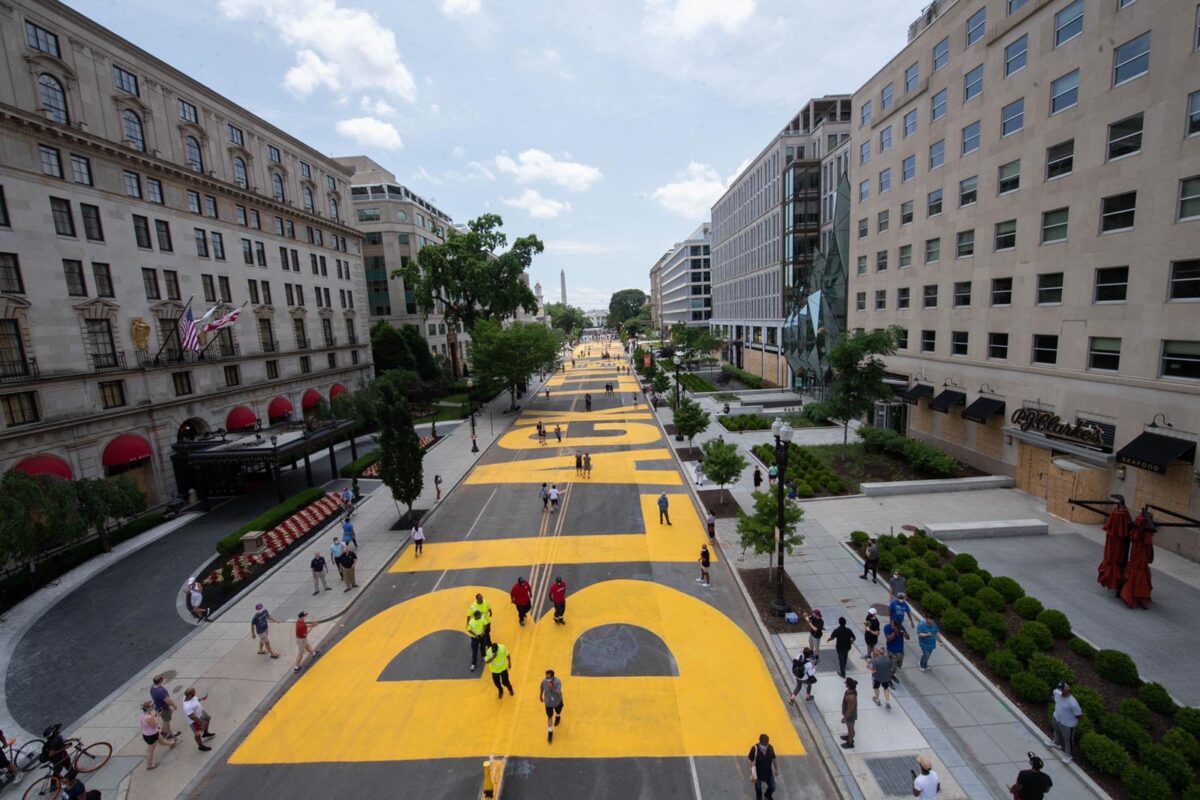 “Black Lives Matter” painted on street in Washington, D.C. on June 5, 2020. Photo by @MayorBowser via Twitter.

On Friday, photos and video went viral of the phrase “Black Lives Matter” being painted in giant yellow letters on a street in Washington, D.C., but the art project highlighted divisions between several of the key leaders in our nation’s capital, as President Donald Trump, D.C. Mayor Muriel Bowser, and the D.C. Chapter of Black Lives Matter traded criticisms back and forth.

The painting began before dawn along 16th Street, one of the streets that leads to the White House. While the presidential residence is federal property, the streets surrounding it are city-owned, and Bowser authorized the painting of the bright yellow letters stretching the full width of the street and visible from blocks away. Because of the location and the large size of the message, many interpreted it as a rebuke of Trump.

Holy cow. The city of DC is out here on 16th steeet behind the White House painting BLACK LIVES MATTER onto the streets — that it owns — stretching all the way to k Street. pic.twitter.com/PU7DW7XZHu

They started at 3:00 am & just finished. Mayor Bowser approved it: pic.twitter.com/kqmknUOaDR

The city also officially designated a section of the street directly in front of the White House as “Black Lives Matter Plaza.”

The section of 16th street in front of the White House is now officially “Black Lives Matter Plaza”. pic.twitter.com/bbJgAYE35b

However, Bowser’s pride was not shared by the official D.C. chapter of Black Lives Matter, which posted a series of tweets throughout the day, slamming the street sign and painting as merely “performative” and “a distraction from her active counter organizing to our demands to decrease the police budget and invest in the community.” The organization also said Bowser “has consistently been on the wrong side of BLMDC history.”

This is performative and a distraction from her active counter organizing to our demands to decrease the police budget and invest in the community. Black Lives Matter means Defund the police. @FenitN @wusa9 @ABC7News @IGD_News @news https://t.co/8VUnHOBtsg

This is a performative distraction from real policy changes. Bowser has consistently been on the wrong side of BLMDC history. This is to appease white liberals while ignoring our demands. Black Lives Matter means defund the police. @emilymbadger say it with us https://t.co/w0ekwSG1ip

Trump, unsurprisingly, did not pass up the opportunity to respond to Bowser’s implied message, throwing his own criticism at her for city budget problems and Bowser’s disagreement with Trump deploying National Guard troops in the city.

The incompetent Mayor of Washington, D.C., @MayorBowser, who’s budget is totally out of control and is constantly coming back to us for “handouts”, is now fighting with the National Guard, who saved her from great embarrassment…

…over the last number of nights. If she doesn’t treat these men and women well, then we’ll bring in a different group of men and women!

So far, Bowser has not publicly replied to either Trump or the Black Lives Matter city chapter.