Did Ted Cruz Drop an F-Bomb While Raging at Pro-Trump Bias on Fox News in 2016? Former Staffers Don’t Doubt It

The relationship between President Donald Trump and Fox News is never far from the news of the day. Whether it comes up on CNN or MSNBC, or is written about by Politico, or even brought up by a Trump Tweet, the network’s Trump coverage, relationship, and staff decisions, is an ongoing topic.

That’s not a new development, though. It’s not even just since Trump took office. In fact, it goes all the way back to the Republican primary, back into 2015, and it was talked about not just by rival networks or Democrats at the time, but openly among conservatives and supporters of other candidates for the Republican nomination.

In a juicy new political tome due out on July 16, Politico’s Tim Alberta talks about it, and in a tidbit going around on Tuesday, specifically about how Sen. Ted Cruz felt about the topic. An anecdote in the book, spectacularly titled American Carnage: On the Front Lines of the Republican Civil War, characterizes Cruz’s feelings about it as… well let’s just call it “not favorable.” Which, according to former members of his staff who spoke to Mediaite, is exactly how he felt about Fox at the time. That’s not to say Cruz ever blackballed the network — in fact, he was on just Tuesday morning.

The book records how Cruz’s frustration with overtly pro-Trump coverage on a channel with enormous influence among Republican voters intensified, until eventually he exploded. The blast came on the night of the Wisconsin primary, 5 April 2016, which Cruz won by 48% to Trump’s 34%.

For Cruz, the victory was of unparalleled importance. It meant he still had a shot at securing the nomination.

After his victory speech, Cruz settled down to watching Fox News on his campaign bus. Alberta writes that he was initially pleased to see his photograph on the screen – an unusual bonus given blanket coverage of Trump by all main TV stations.

But then Sean Hannity, the unashamedly partisan and extreme rightwing Fox News host, interjected by pointing out Trump’s strong standing in upcoming primaries in New York, the north-east, Indiana and West Virginia. At that point, the author says, the Texan blew.

“What the fuck?” he shouted, leaping from his seat and startling staff who had never seen him quite as agitated.

The idea of a Fox News bias against Ted Cruz specifically, rather than just being pro-Trump, is also not a new revelation. It came up a lot that year, including on conservative blogs and even among campaign and senate staff.

One former top Cruz staffer told Mediaite the anecdote is “very believable.” Among both the campaign staff and senate staff, it was generally accepted that Fox News was anti-Cruz, even before they were for Trump. “Some of them liked Rubio, too, but he just never caught fire,” said the staffer, who conjectured that some opinion hosts who wanted to support Cruz’s immigration policy, but felt they couldn’t because of “leadership” at the network, “sort of defaulted” to Trump as “good enough'” on the issue.

This former member of Cruz’s office told us that when then-Fox News host Megyn Kelly made a point of having Cruz be her first interview on the premier of her show The Kelly File, his people were excited about it. But after Kelly’s very first question to Cruz was “What’s it like to be the most hated man in America?”, the campaign had a realization.

“We knew right then Fox would never be friendly to Ted,” said the former staffer.

Another former Cruz staffer, this one from the campaign, told us, “I wasn’t in Wisconsin that night, and I didn’t hear anything about this specific WTF, but it would not shock me at all to learn that it was true.”

“In fact,” said the former staffer, “I have no difficulty believing it at all.”

They said that lots of members of the campaign heard Cruz on “multiple” occasions loudly “lamenting” the lack of credit and attention he had in the news after the Wisconsin primary, which he said “was and should have been covered as” a huge victory for the campaign. “Fox News immediately pivoted to the upcoming New York primary, instead, so they could project how well Trump would do.”

His former senate staff member, like everyone we talked to, felt Cruz had a good case about bias. “I don’t know if it was [Roger] Ailes or [Rupert] Murdoch or whoever,” they said, but everyone was convinced that, somewhere higher up the ladder at the network, Ted Cruz was on the bad list.

Several people also brought up bias at the Wall Street Journal, something Cruz talked about on the record in 2015.

“For the next three months, the Journal should change their header to the Marco Rubio for President Newspaper, because their attacks — and it’s going to keep coming because Marco fights for the principles they care about,” Ted Cruz said to Morning Joe host Joe Scarborough in December of 2015. Around that time, November to January in particular, the paper ran several editorials criticizing Cruz, and Cruz fired back. It was enough of a scuffle that Politico at the time wrote that “the Journal finds itself at war with Cruz.”

The Wall Street Journal, of course, is part of News Corp., which of course was Rupert Murdoch’s company. The implication from a former member of Cruz’s Senate staff was obviously that Fox News was punishing Ted Cruz for his battle with the company’s publications.

It presents a kind of sad irony. The theoretical sequence of events is that the Wall Street Journal favored Marco Rubio over Ted Cruz because Rubio was softer on immigration, and that Ted Cruz attacked them over it, thus incurring wrath that extended to Fox News, where the folks who favored hard-line immigration views ended up turning to Trump and spurning Cruz. Basically, that the Journal dissed him for being too hard on immigration, and FNC favored his immigration views so they turned to Trump.

Alberta’s book notes that Ted Cruz was, at one time, friendly with Roger Ailes, with whom he was “regularly having breakfast in New York” back in the day, the Guardian writes. “But as the 2016 primary cycle unfolded, Ailes cut himself off from Cruz, Alberta reports. By the New Year, just weeks before the Iowa caucuses, the TV executive was no longer taking the politician’s calls.”

Sources confirmed this timeline to Mediaite.

Again, allegations of a Fox News Channel bias against Cruz weren’t an unknown at the time. There were accusations across conservative publications (see here or here or here or here or here.) and even public remarks by members of his campaign. For example, Brian Phillips, who was Director of Rapid Response for the Cruz for President campaign, tweeted about it frequently. 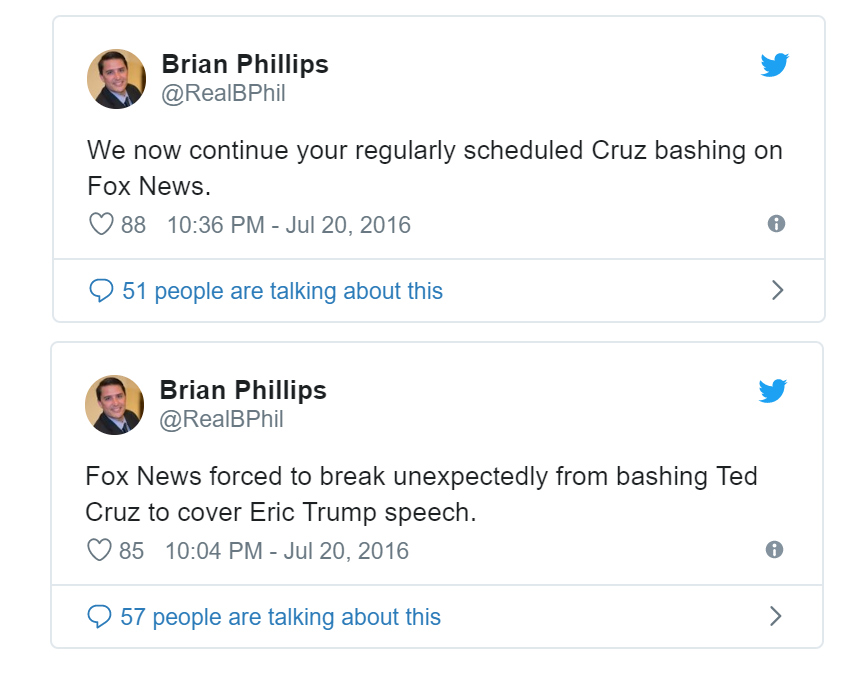 Interestingly, he even hinted at the same thing we heard from other staffers who spoke with us about it today: that there was a directed bias from up top at the company. 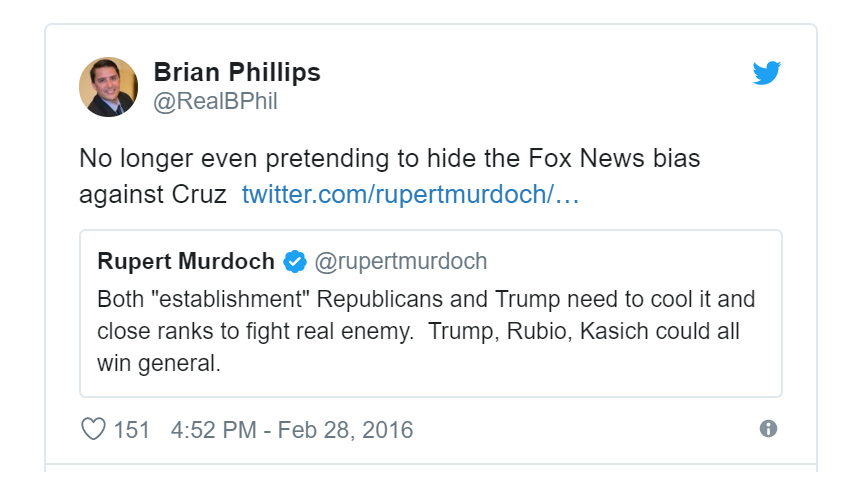 Still, enmity between Fox News and Cruz did not start and end with the views of the staffers. Cruz famously had a falling out with the network’s top Trump booster, Sean Hannity, in a radio appearance back in 2016.

Hannity asking Cruz “why do you do this” had the tone of someone who wasn’t just referring to on-air confrontations. The date of that interview was April 19, 2016. The date of the anecdote from American Carnage, with Cruz exploding while watching Hannity, was April 5, 2016. Just two weeks earlier.

Of course, that was mild compared to this clip, when it was Cruz versus Chris Wallace on Fox News Sunday in February of that year.

“Agitated” is a word that would definitely fit here.

Later in January, he brought it up on stage at the Fox News debate, albeit less explicitly, as you can see in the clip at the top of this article.

Then, of course, there was the time he simply said it outright.

“Rupert Murdoch and Roger Ailes of Fox News have turned Fox News into the Donald Trump network, 24/7,” he said. That was on May 3rd, exactly two weeks after his Hannity interview.

So the accusations of bias by Fox News aren’t new, and they aren’t limited to Democrats, or even just to Ted Cruz. In fact, among Republicans it’s not even limited to the last few years (Gingrich accused the network of being in the tank for Mitt Romney way back in 2012.) It is practically traditional to see Fox News as “picking winners and losers” among Republicans. With Trump, and with Cruz, it was simply more pronounced. So much so that conservatives on social media and on blogs like RedState, National Review, Conservative Review and elsewhere openly questioned the network’s motives back then.

The people we spoke with who worked for Ted Cruz said they found the story “believable.” Based on all the contemporary information, it certainly seems so. In fact, the only part that seems doubtful is when author Alberta suggests the Cruz staff were “startled” by the outburst.

From what we can tell, they shouldn’t, and wouldn’t, have been at all surprised or startled at the senator cursing Fox News.

Mediaite contacted Senator Cruz’s office for comment but did not receive a response before publication.