James Karklins Out as President of Kushner's Observer Media

Exclusive: James Karklins OUT as President of Kushners’ Observer Media 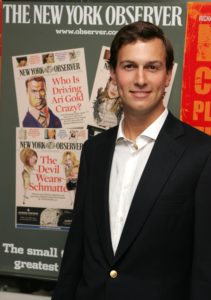 Observer Media president James Karklins has stepped down from his position, Mediaite has learned.

A source said Karklins and Observer Media —  which is controlled by Jared Kushner’s family — came to a mutual decision for Karklins to leave his role as president. He will remain on the advisory board of the company.

In an internal memo, Observer chairman and publisher Joseph Meyer announced the appointment of  Michael Rose as CEO of Observer Media.

“After two great years at Observer Media, James Karklins decided to pursue his next chapter and will be transitioning to a board advisory role and assisting with the transition,” Meyer, who is Kushner’s brother in law, wrote in the memo obtained by Mediaite.

Karklins joined in January 2018 to steer the publisher into a new era after it ceased printing its salmon-colored weekly paper and a shakeup in leadership saw the departure of editor in chief Ken Kurson. The 30-something media exec previously served as chief marketing officer for Newsweek.

Karklins was tasked with replacing Kurson as editor of Observer.com. Ben Robinson, the former chief creative officer of Thrillist, was hired for the role in February 2018 — only to leave less than a year later. Robinson was replaced by the Observer’s audience engagement manager, Mary von Aue, who was named editorial director.

Jared Kushner bought the New York Observer — a sardonic paper covering New York City media, politics and culture — in 2006. When he joined the Trump administration as a senior adviser, Kushner stepped down as publisher of the Observer. Observer Media is still owned by his family trust.