GOP Group To Push Ad On Fox News Blasting Ken Starr: ‘Puzzling’ He Was For Clinton Impeachment, But Not Trump’s

GOP Group To Push Ad On Fox News Blasting Ken Starr: ‘Puzzling’ He Was For Clinton Impeachment, But Not Trump’s

The GOP organization Republicans for the Rule of Law is set to push a new video ad featuring Paul Rosenzweig, former Senior Counsel in the Whitewater Investigation, billing Ken Starr‘s anti-impeachment position of President Donald Trump as “puzzling” when contrasting his position with when Starr once argued for the impeachment of President Bill Clinton.

On Wednesday the ad will be aired nationally on Fox News channel’s morning show Fox & Friends and on Fox Business’ Lou Dobbs Tonight.

Paul Rosenzweig opens the one-minute ad by introducing himself as former Senior Counsel to Ken Starr in the impeachment of President Bill Clinton. He then bills Starr’s move to defend President Donald Trump against impeachment as “puzzling.”

“It’s puzzling to me that Judge Starr has joined the Trump team, I do not see how anybody who recommended the articles of impeachment for Bill Clinton, that Ken Starr did, could not have recommended an impeachment article against President Trump,” Rosenzweig states in the ad.

The ad then continues with Rosenzweig, stating, “the idea that the Senate should only hear what the house presented is ludicrous, and ahistorical every impeachment trial that has been conducted had additional witnesses.”

“It seems to me that the lessons of the Clinton impeachment, that conservatives wanted to draw – that charter and the rule of law matters and to now see conservatives abandon ing those principles for presidential support, is disheartening,” the ad concludes while showing old pictures of Senate Majority Leader Mitch McConnell (R-KY) and Senator Rand Paul (R-KY). 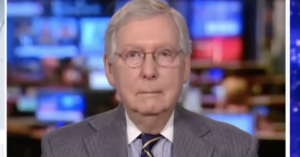 Director of Republicans for the Rule of Law Bill Kristol ripped Starr in a press release in part stating, “when lawyers use their legal skills to defend a client, they do not lend that client their moral authority as well. Judge Starr recommended the impeachment of President Clinton in part because the president had attempted to impede discovery in a civil action.”

“Anyone who believed that was impeachable can’t now believe that President Trump’s absolute refusal to cooperate with an impeachment investigation is acceptable constitutional conduct. Judge Starr faulted President Clinton for trying to hide the truth then. He cannot consistently excuse President Trump’s stonewalling now,” Kristol added.

Republicans For The Rule of law this week are airing an ad targeted at urging U.S. Senators to let former National Security Advisor John Bolton be allowed to testify before the Senate due to having first-hand knowledge.