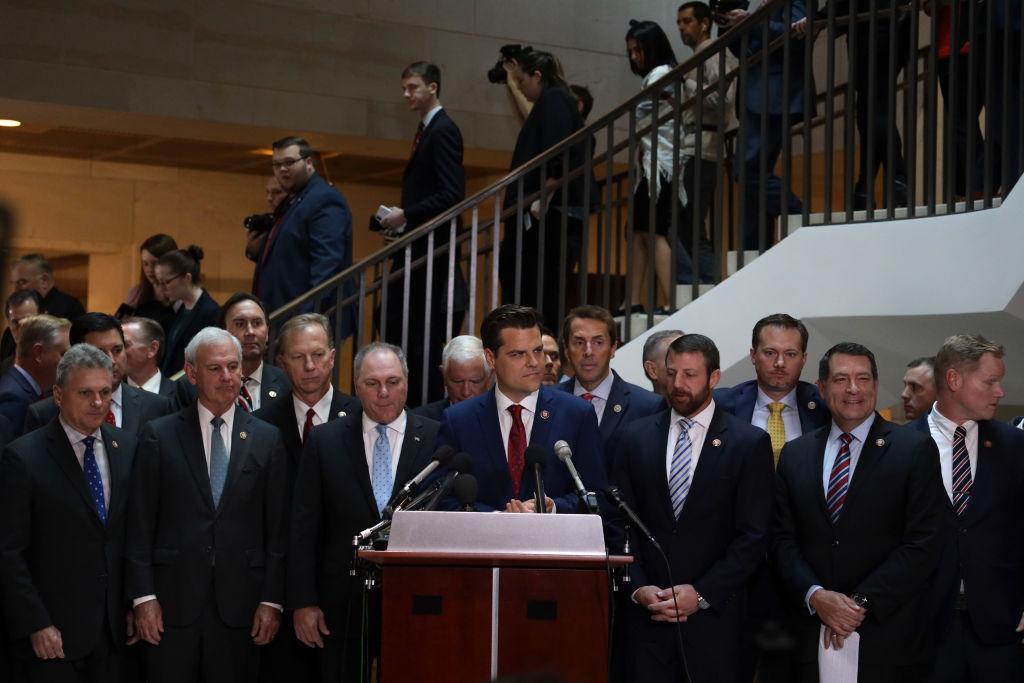 House Republicans that stormed an impeachment inquiry on Wednesday drew a barrage of online derision and mockery after reports that they were actively seeking to be arrested by Capitol Police to add drama to their contrived, political stunt.

Led by right-wing provocateur Rep. Matt Gaetz, several dozen House Republicans broke House rules by occupying a House Intelligence hearing room to protest the Democrats’ impeachment process of President Donald Trump and some also violated federal law and by bringing cellphones into the secure, compartmentalized intelligence facility (SCIF). A subsequent Fox News report revealed that some of the GOP House members “asked to be arrested” to make an even bigger spectacle of their stunt.

The absurdity of House Republicans’ attempt to replicate civil rights’ protests by getting arrested for violating national security protocols and gaining access to a hearing that nearly two dozen GOP members of Congress were already attending was not lost on critics online.

I’ve always thought telling my children I served with civil rights icons like John Lewis & Elijah Cummings would be the highlight of my time in Congress. But now, I can share the time Matt Gaetz, Louie Gohhmert, & Steve King sat in an air-conditioned SCIF and ate pizza for 5 hrs. https://t.co/be8VFclpWR

They’re treating this as if it’s a civil rights protest https://t.co/pHpOi7LcL5

Kamala: I’m not throwing away my shot https://t.co/OzMNnbxx2J

MAGA: My Allies Get Arrested https://t.co/4rA3BDtzut

“We want to be just like Jane Fonda,” shouted the conservatives https://t.co/hgI8dRGqPM

Must be a nice little change of pace for Gaetz, who typically tries to stay *out* of jail. https://t.co/OUuxF8ZLpk

The next Republican who bitches about news coverage of civil rights or climate activists being arrested or @aoc somehow being performative because of her questions should have their mouth sewn to Louie Gohmert’s ass as a warning to future generations https://t.co/t64eNjqOAD

But how did they say it: “Please arrest me daddy?” Or *whispers* “Nice handcuffs. What you doing later?” Or “I’m being naughty mommy. Please punish me” OR “Hey, I want to be on @FoxNews more – really helps me with my base – mind slapping some cuffs on me for the cameras?” https://t.co/b5rMasWecu

They’re like people who think going to a Spin Doctors concert is the same as going to a Nirvana concert. https://t.co/oTvCPuFghz