Ivanka Trump Gets Vaccine, Encourages Followers to Get It Too 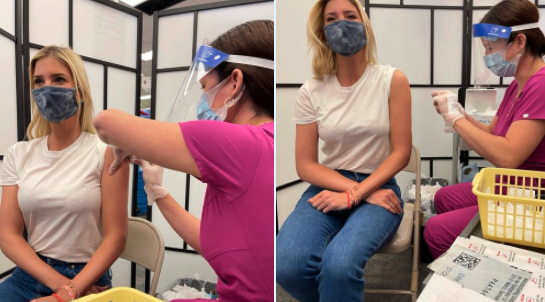 Former first daughter Ivanka Trump shared pictures of herself getting the coronavirus vaccine Wednesday, posting pictures to social media of her and a nurse, who administered the injection.

“Today, I got the shot!!!” Trump posted Wednesday on Instagram and Twitter. “I hope that you do too! Thank you Nurse Torres!”

Today, I got the shot!!! I hope that you do too!
Thank you Nurse Torres!!! ? pic.twitter.com/gPL1Mecv1G

Trump shared two photos of her with the nurse, one of which appeared to capture the actual jab.

On Instagram, Trump received less-than-glowing responses, with many people essentially saying “Thanks, but no thanks” in the comments, doubling down on their refusal to get the vaccine and, in some cases, expressing disappointment in Trump herself.

In the U.S., coronavirus vaccine hesitancy has grown since the rollout ramped up in February. In March, 49% of Republican men said they would choose not to be vaccinated if given the chance, and on Wednesday, a new study revealed that almost half of all Republicans say they will never get the vaccine. This isn’t particularly surprising, given recent commentary from some in the conservative media.