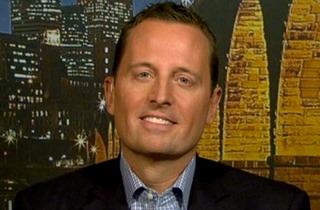 President Donald Trump has announced that he will name U.S. Ambassador to Germany and strident pro-Trump ideologue Richard Grenell to be the new acting Director of National Intelligence, which would make him the first-ever openly gay cabinet member.

“I am pleased to announce that our highly respected Ambassador to Germany, @RichardGrenell, will become the Acting Director of National Intelligence,” Trump wrote. “Rick has represented our Country exceedingly well and I look forward to working with him.”

I am pleased to announce that our highly respected Ambassador to Germany, @RichardGrenell, will become the Acting Director of National Intelligence. Rick has represented our Country exceedingly well and I look forward to working with him. I would like to thank Joe Maguire….

According to the New York Times, the White House is looking to tap Grenell because Joseph Maguire, the current acting DNI, who ultimately took over the agency after former DNI Dan Coates resigned last summer, cannot, by law, serve past March 12. Grenell can replace Maguire as the acting head of the DNI because he has been already Senate confirmed for his ambassador post. But Trump is not expected to try to nominate Grenell to be the permanent director of the country’s 17 intelligence agencies.

“Since the acquittal of Mr. Trump in the Senate impeachment trial, the White House has been pushing to remove officials seen as disloyal or holding views contrary to the White House, looking for replacements who are more likely to follow the president’s wishes,” the Times reported. “While it has never been clear how Mr. Trump viewed Mr. Maguire, there is little doubt that the president would like a partisan fighter in the post before any public testimony before Congress.”

Grenell enjoys a reputation as just that. A former Fox News contributor, he is known to be a fierce online warrior, who has been unafraid to parrot the Trump line and lecture his host country, so much so that they called on the White House to recall him from his ambassador post in Berlin. Grenell was infamously fired from his role as national security adviser to the 2012 Mitt Romney campaign after a right-wing backlash over his being openly gay.

“Grenell is also a polarizing figure and his confirmation by the Senate is not assured,” the Times says. “A number of Republican senators have privately pushed the administration to nominate a national security professional or politician who is seen as a less divisive figure.”

News of Grenell’s appointment to a critical, nonpartisan cabinet post unleashed a fierce backlash online, as many critics criticized his notable lack of national security experience as well as his unapologetically brash partisan attacks.

Reminder: Jim Clapper spent 50 years in intelligence, headed two agencies, and served as the Under Sec of intel at the Pentagon before becoming DNI. Ric Grenell was … a notably rude Twitter troll. https://t.co/ST1adUqJJR

Ric Grenell to a colleague (back in the day) when she walked into the office with red shoes on:

“Didn’t your mother ever tell you only whores and very small children wear red shoes?”https://t.co/Om9pyLcayV

Trump is doing this because he knows Grenell couldn’t be confirmed to the role, which is what the US Constitution requires. Once again, when the Constitution is inconvenient, Trump finds a work around and the Republican-controlled Senate just obliges. Originalism, indeed. https://t.co/PhS3D5hsXh

Another slap in the face to my former intel colleagues. Grenell is a partisan bombthrower whose only skill is defending Trump. Trump’s decision not to nominate a permanent DNI underscores that he has no use for intel and no regard for national security. https://t.co/JDk83yBq3j

This is the definition of failing up. He failed miserably in Germany but at least wasn’t a threat to America’s national security. As Acting DNI, he will. Trump’s team of “acting” lackeys just keep getting worse. https://t.co/QOOJBiHduU

oh cool, a Twitter troll is going to be the acting DNI. Great, great. https://t.co/c7a2oZgdue

A temp hire for DNI from out of the cult with no intel experience but who’s carrying around about 30,000 white-hot Twitter grudges.
I feel safe.

This is a national disgrace. Grenell would be the least qualified intelligence chief in US history. https://t.co/WliTv6DHTe

He won’t be nominated because as spineless as GOP Senators normally have been even they would not approve this move. It’s an absurd move that puts a completely unqualified person in charge of the entire intelligence community. https://t.co/332rxGbftu

While the entire country of Germany says good riddance, the rest of us should be incredibly concerned about further politicization of intelligence.

Grenell is nothing more than a shill for Trump. https://t.co/eop3Ubqcdq

In Grenell, Trump will now have an unwavering loyalist overseeing the Intelligence Community. https://t.co/0m78mMypoH

Congrats to the first person I ever blocked on Twitter for aggressive rudeness! https://t.co/7tlAONUYx1