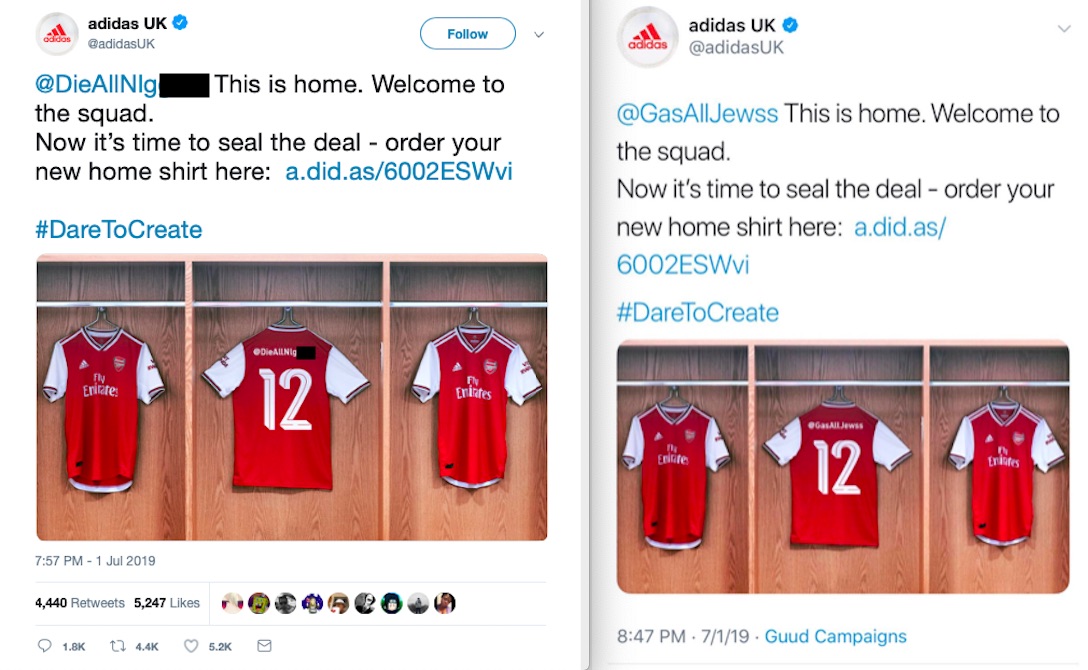 AdidasUK’s social media campaign to promote the purchase of new kits for the Arsenal football club took a decidedly ugly and unexpected turn, after Twitter users gamed its reply bot into putting racist and anti-Semitic Twitter handles on the club’s virtual jerseys.

The campaign began with a Twitter post that asked Arsenal fans to like the tweet and then “look out for a reply.” Later, some lucky accounts received an automated reply on Twitter that included a mock-up of the new team jersey with the account’s Twitter handle virtually printed on the back. But even after replies from apoplectic fans piled up, the he sports equipment manufacturer’s offending reply tweets stayed up for hours until finally deleted early morning Tuesday, London time.

You’re not born a Londoner, you’re made one.
Introducing the 2019/20 @Arsenal home kit, exclusively available through adidas and official club stores.

The cause of the failure wasn’t officially explained — as of publication time, AdidasUK had not posted any apology or explanation for its social media disaster. However, it appeared that the company’s automated programming wasn’t able to weed out what a human eye would’ve caught easily. One account, which has since been deactivated, looked to have used a combination of upper case “I”s and lower case “l”s to trick the Twitter Bot into propagating a racist threat that included the n-word. Another account, also no longer active, appeared to use the same ruse, along with an extra “s,” to fool the @adidasUK account into promoting a similarly vicious, anti-Semitic threat that evoked the Holocaust.