The Telegraph's Hot Take on Nike's New Plus Size Mannequins: Swing and a Miss 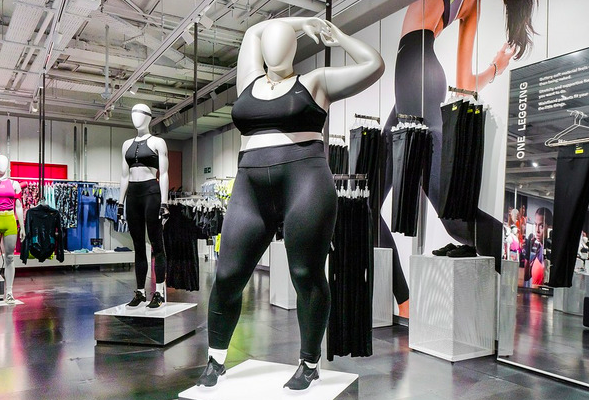 The Nike store in London recently added larger than traditional mannequins that show off size 18 activewear, with which Gold took issue.

“I fear the war on obesity is lost,” Gold begins, describing the new models as ‘gargantuan, immense, vast’ and ‘heaving with fat.’

“She is not readying herself for a run in her shiny Nike gear. She cannot run. She is, more likely, pre-diabetic and on her way to a hip replacement. What terrible cynicism is this on the part of Nike?” says Gold.

“The fat-acceptance movement, which says that any weight is healthy if it is yours, is no friend to women, even if it does seem to have found a friend in Nike. It may, instead, kill them, and that is rather worse than feeling sad. ”

This article is so cruel. The @Telegraph should apologise for printing such hate. It’s incredibly upsetting. https://t.co/x8RXDgSTt7

Roxane Gay, among others, castigated the tone-deaf article:

I work out six days a week. I am fat. I wear workout clothes while working out. The world continues to turn. Shut up.

Tanya must not run a lot of races. I’ve been in half marathons with women who look like those mannequins.

This writer has gone their entire lives without seeing a fat person exercise?? Really??? What kind of fatphobic nightmare of a bubble do they live in?

“The very critics who argue that plus-size women need to exercise, will then turn around and attack them when they do work out (and, say, choose to do so in Nike gear),” said a writer at Refinery 29.

“Fatphobia often implies that fat people should strive to be thin while also ridiculing and shaming them when they want to exercise. It’s a lose-lose situation and a sad continuation of the status quo,” wrote Jamie Feldman at the Huffington Post.

The Good Place actress Jameela Jamil also chimed in. “It’s hate speech. We can’t allow people to discuss size like this. We wouldn’t allow it about race or religion in these huge publications,” she said.

I went off. If you care about women, you best care about fat women too and show up and get loud and speak out about this sort of outrageous bigotry. It’s bad enough they have been subjected to constant policing, harassment and concern trolling over their health, when nobody knows their health situation. I GURANTEE I am less fit and less healthy than all of my friends who are bigger than me. You don’t know *shit* about their health. You are not an MRI. But THIS is crazed bullying. It’s hate speech. We can’t allow people to discuss size like this. We wouldn’t allow it about race or religion in these huge publications. The @telegraph are supporting bullying and hatred. If we just sit back and do nothing, then WE are supporting bullying and hatred. I’m disgusted and furious. Everyone at every size deserves to feel comfortable and good about themselves. And god dammit how can we shame people about their size and then try to take down mannequins for sportswear that include their size, inviting them at last into a part of the world they have been previously excluded from. So backwards, so grotesque and so disappointing. ?

As did Ultra runner Latoya Shauntay Snell. “My robust imagination must’ve zapped myself skinny at every race. I must’ve heaved my fat into a dumpster while nobody was looking. There’s no way I ran in this 247 lb fat suit,” she said.