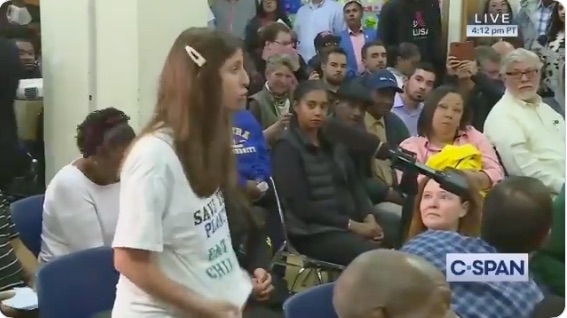 President Donald Trump viciously insulted Rep. Alexandria-Ocasio Cortez as a “wack job” on Twitter, commenting on his son Donald Jr.’s retweet of a video of a random woman’s bizarre stunt at one of the Congresswoman’s town halls.

The president’s son had snarked that the unidentified woman, who had incoherently ranted at Ocasio-Cortez about the climate crisis, “seems like a normal AOC supporter to me.”

As the woman spoke, she took off her jacket, in what appeared to be a pre-planned move, to reveal a T-shirt that read “Save the Planet, Eat the Children.” AOC clearly grew increasingly concerned about the woman’s behavior during her bizarre rant, and after about 30 seconds, a staffer gently took the microphone away and escorted the woman out of the audience.

The video also showed others in attendance growing agitated and skeptical about the unknown woman’s remarks. And, notably, the slogan on the woman’s T-shirt directly invoked Jonathan Swift’s famous satirical piece A Modest Proposal, which called for eating the children of Ireland, suggesting this might be a ham-fisted political stunt or troll operation of some sort.

The Congresswoman, who never defended the woman’s absurd remarks, speculated that the woman might have been “suffering from a mental condition” and defended the woman from ridicule and mockery that she said right-wing supporter had been aiming at her online.

This person may have been suffering from a mental condition and it’s not okay that the right-wing is mocking her and potentially make her condition or crisis worse. Be a decent human being and knock it off.

But AOC also fired back directly at Trump’s slur with a broadside aimed directly at his possible impeachment.

Better than being a criminal who betrays our country. https://t.co/UnShA6gcQQ