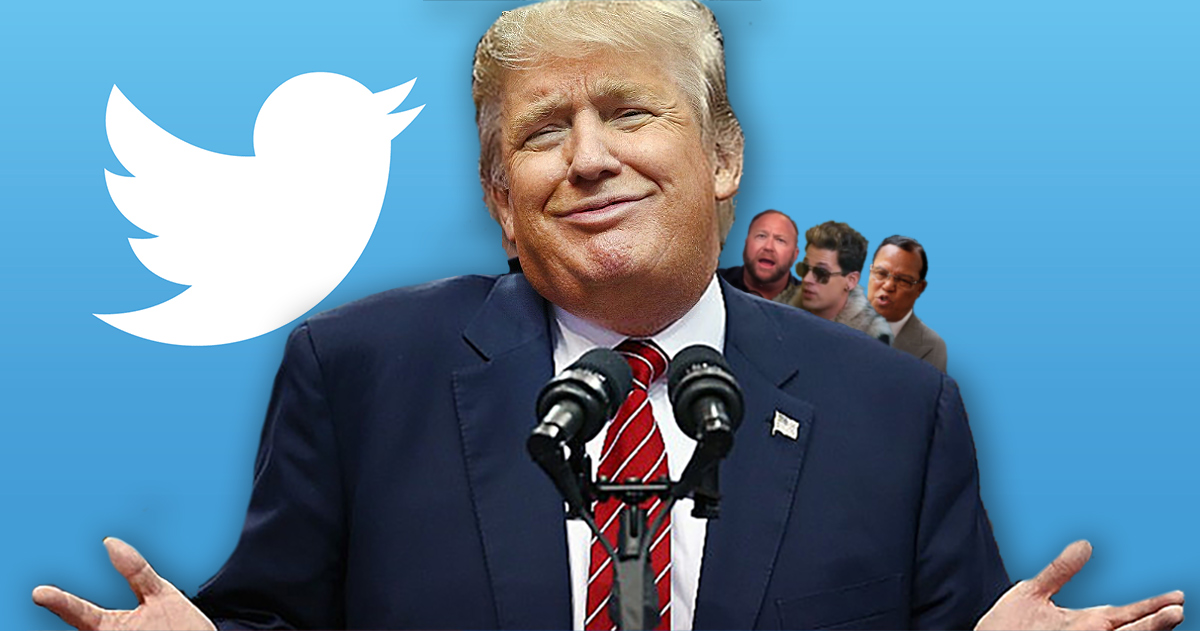 President Trump was keeping people on Twitter lit up all morning on Sunday, rampaging against the New York Times, tweeting about former President Barack Obama, and getting set on fire by an enraged staffer spouse.

In this case, it was for his brining up the very hot and triggering topic of people being banned on social media, people who he referred to as “Conservative Voices” that should be brought back.

Twitter should let the banned Conservative Voices back onto their platform, without restriction. It’s called Freedom of Speech, remember. You are making a Giant Mistake!

Obviously, like most of the Twitter morning, it didn’t go well. The primary blue checkmark response was about identifying which actual folks were banned.

He's talking about Alex Jones, who claimed the victims of Sandy Hook were child actors https://t.co/ri8YPe8XeP

The man who calls The New York Times and CNN fake news thinks Twitter should be more lenient towards conspiracy theories from Russian bots and Alex Jones. https://t.co/S2JvsWZUt5

But that wasn’t the only kind of response. Naturally, hypocrisy featured prominently as a critique.

Also, once again, this serves as a reminder that the leader of the alleged party of free markets and keeping government out of private enterprise is once again trying to force a private company to bend to his wishes. https://t.co/zyI6d7ki4L

From the man who tries to shut down news outlets and bullies individuals who cite facts against him. Our whiney hypocrite in charge doesn’t know how these rules were designed to work. https://t.co/7A2QjwrCTB

This idiot has the nerve to talk about "Freedom of Speech" as his administration is attempting to lock up JULIAN ASSANGE for LIFE for publishing TRUTHFUL information, Exposing US WAR CRIMES in IRAQ and AFGHANISTAN. Yeah Freedom of Speech my ass!#freeJulian #FreeChelseaManning https://t.co/SUKqeriuiP

Trump has no idea what he’s talking about when he rants about “Freedom of Speech.” He literally blocked Brandon Neely, Holly O’Reilly, Nick Jack Pappas, Rebecca Buckwalter Poza, Joe Papp, Philip Cohen, and me from participating in this public forum under his tweets.

A lot of lawyering, armchair and otherwise, on exactly what constitutes a free speech issue…

LOL HAVE YOU EVEN EVER READ THE BILL OF RIGHTS.
"Congress shall make no law … abridging the freedom of speech."
There is no right to use Twitter. There is no right to Internet access. The Bill of Rights was written to protect the public from govt, not the other way around. https://t.co/bABKB3BTv5

Lawyer checking in. Freedom of speech doesn't apply to private corporations, it only protects when the government tries to punish one's speech.

The U.S. Supreme Court says "no official, high or petty, can prescribe what shall be orthodox in politics, nationalism, religion, or other matters of opinion, or force citizens to confess by word or act their faith therein."

But Trump denied "Freedom of Speech" for NFL players. https://t.co/oWJMoBqfbd

With some dispute on that point.

And so much more. The inevitable capitalization question…

Why do alt-right lunatics always write their nouns in caps? A former friend of mine does the same thing and it makes him look as crazy as his views do. https://t.co/23iBYkR2je

In your evil little mind the only people protected by the 1st amendment are the enablers who agree with you. https://t.co/sTdJ4YJsUL

… meme references (if a bit strained)…

… and even a gamergate reference.

If Trump was 14 he would definitely be one of those "get politics out of games" dudes. https://t.co/gd6denP8PS

Oh, and of course a promo for some other site because advertising.

You should join Parler where no voice is silenced regardless of political party and the rules on what is allowed and not allowed is clearly defined by applicable law. https://t.co/XYwGoW91gO

In labeling all the banned as Conservative Voices™, Trump was somewhat an echo of a story that itself sparked a big controversy, when the Washington Post labeled Louis Farrakhan as a right winger after he was banned from Twitter.