Tulsi Gabbard Doubles Down, Shreds Trump for ‘Pimping Out’ US Military to Saudi Arabia: ‘We Are Not Your Prostitutes’ 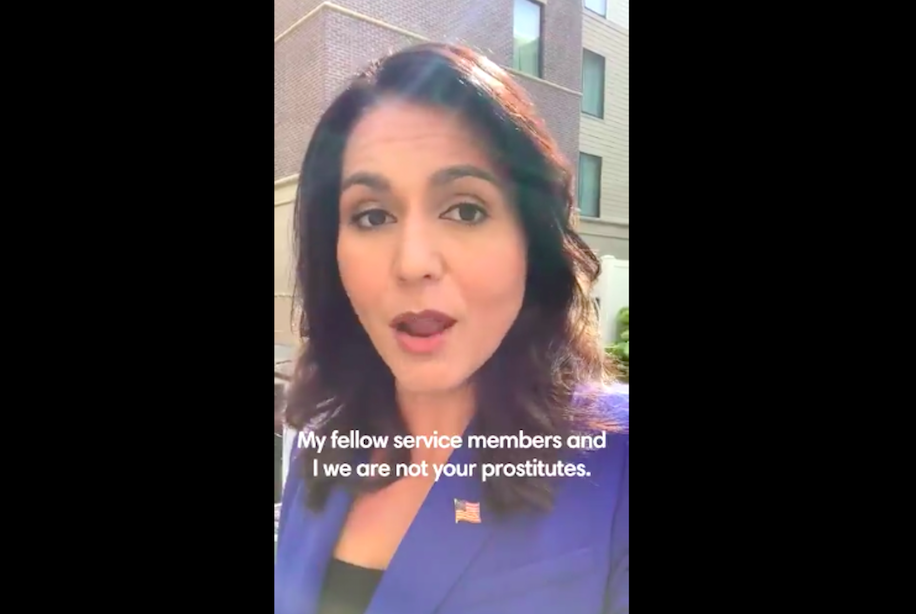 Democratic 2020 presidential candidate and US Army Reserve officer Rep. Tulsi Gabbard doubled down in her fierce criticism of President Donald Trump, blasting him for “pimping out” the US military to protect Saudi Arabia and adding: “We are not your prostitutes.”

In a two-minute video posted on Twitter, the Hawaii Congresswoman called Trump “despicable” and “unfit” to be Commander-in-Chief over his recent pledge to act at the direction of Saudi Arabia in response to the air attack on its Abqaiq oil facility. Such fealty to another country’s foreign policy agenda, she said, was tantamount to a “betrayal of my patriotic brothers and sisters in uniform and to our Constitution.”

.@realDonaldTrump Despicable. Offering to place our military assets under the command of a foreign country—Saudi Arabia—is a disgrace and betrayal of my patriotic brothers and sisters in uniform and to our Constitution. We are not your prostitutes. You are not our pimp. pic.twitter.com/Cu1OewEMOC

Gabbard’s stinging rebuke came just a day after she slammed the president for his bellicose claim that the US was “locked and loaded” in preparation to strike back at the possible culprit of the attack, Iran. So publicly committing the US military to another country’s defense was akin to making our country “Saudi Arabia’s bitch,” Gabbard said, adding that it directly contradicted Trump’s “America First” platform.