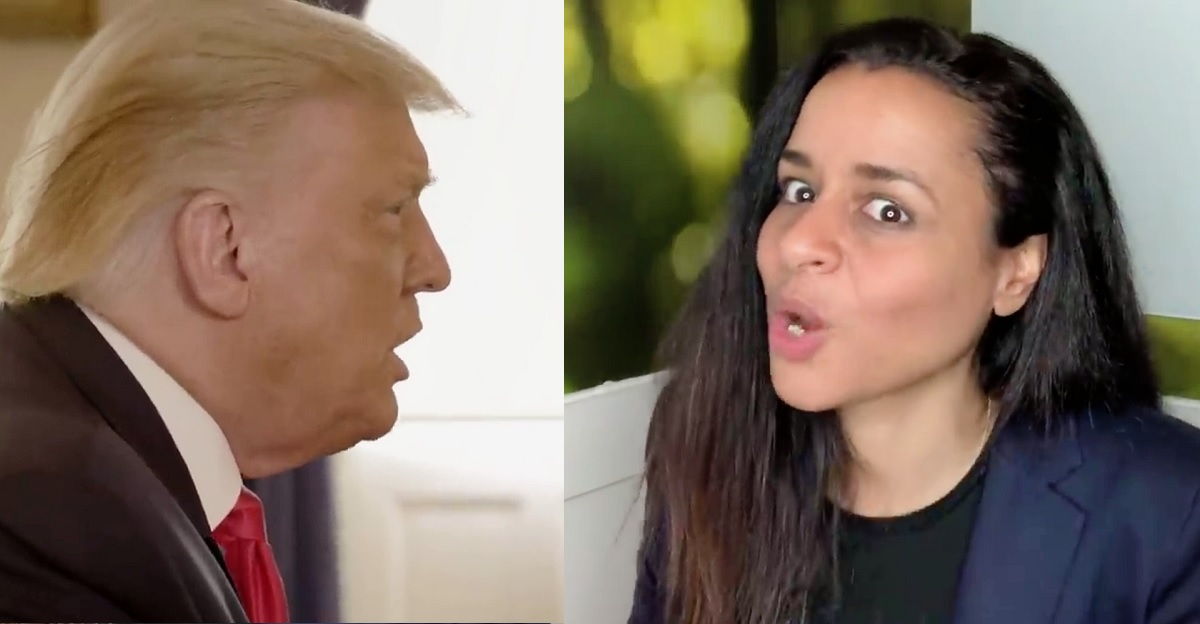 President Donald Trump rocked the social media world when he blurted out that he will be banning TikTok on Saturday, prompting a flood of reactions that pegged his decision to the dual humiliations of comedian Sarah Cooper and the pack of users who sabotaged his Tulsa rally.

On Friday night, Trump told reporters aboard Air Force One that he’d be banning TikTok via executive order this weekend according to pool reporter David Cloud of the LA Times, he said a bunch of stuff off the record as well:

POTUS came back on the plane to talk with pool and put the following on the record:

Trump told reporters traveling with him from Tampa that he planned to take action against the popular video-sharing app as soon as Saturday.

“As far as TikTok is concerned we’re banning them from the United States,” Trump said.

Trump said he could use emergency economic powers or an executive order to ban TikTok in the United States.

“Well, I have that authority. I can do it with an executive order or that,” he said referring to emergency economic powers.

Trump made clear he was not in favor of a deal to let a U.S. company buy TikTok’s American operations.

The rest of his comments were OFF RECORD.

Enterprising Yahoo! News White House correspondent Hunter Walker asked Trump to say goodbye to users of the platform — and Trump did it, shooting a wave as he trudged away from Marine One Friday night.

Here is my final TikTok with President @realDonaldTrump pic.twitter.com/ahpaCCxg4C

Trump teased the move earlier this week as he prepared to depart aboard Marine One, a scene that TikTok viral sensation Sarah Cooper immortalized with one of her trademark spoofs just hours before Trump declared he’d be banning the site.

How to tick tack pic.twitter.com/1Mn8nk363f

The proximity of the event and Trump’s reputation caused many to point the finger at Cooper’s routine eviscerations as the reason for the threat:

I’m upand I saw Trump want to ban TikTok because of Sarah Cooper. She is a national treasure and I will watch her on any platform except Parler because I am banned there for calling Dan Bongino a toasterhead motherfucker.

Trump’s going to shut down TikTok because of Sarah Cooper, isn’t he?

Ever seen @sarahcpr videos on #TikTok ?

Does Trump want to ban TikTok or Sarah Cooper ?

Trump banning TikTok simply to stop @sarahcpr Let’s not dress it up any other way. https://t.co/DB9dhA0zIu

.@realDonaldTrump is such a fragile man that, of all that is crippling the US, his focus is to ban @tiktok_us.

To shut down @sarahcpr, a comedienne who has got under his skin. @JoeBiden should make #sarahcooper his running partner. #tiktokban #Covid_19

Which video was it??

Cooper herself weighed in, pointing out that unlike many of her videos, her most recent creation did not originate on TikTok.

This wasn’t made with TikTok 😂 https://t.co/0nwxsRzqWZ

Others also tied the move to the TikTok teens who clowned the ticketing process for Trump’s rally in Tulsa, leading the campaign to boast of over a million requests, followed by a dismal turnout.

Which video was it??

Maybe I’m not following along closely enough but I feel like Trump is trying to outlaw TikTok because of Tulsa and also Claudia Conway.

Just to get this straight, Trump is banning TikTok because teens requested tickets to his Tulsa rally but didn’t show making it seem empty, but he’s not upset that his Tulsa rally killed Herman Cain. Okkayyyyy 💁🏽‍♀️💁🏽‍♀️💁🏽‍♀️

I know the tiktok debate has some real substance to it, but wonder how much of it for Trump comes down to @sarahcpr & the Tulsa rally trolling pic.twitter.com/wzhqx0rp5V

There were other reactions as well, and they weren’t very positive.

Coronavirus has killed more than 150,000 people in the US. Therefore, President Trump is banning TikTok

delete the coronavirus, not tiktok @realDonaldTrump

I’ve was never into the “this is a distraction, he’s playing you” theory of Trump, and I’m still not into it, but it’s amazing that on Aug 1, the day we crash into the mountain with the coronavirus $$ expiring and being replaced by *nothing*, the big story will be about TikTok

The Trump administration has been talking about action against TikTok for some time, citing national security concerns.