WATCH: D.C. Mayor Calls Out Trump at Protest: ‘Today, We Say No. In November, We Say Next.’ 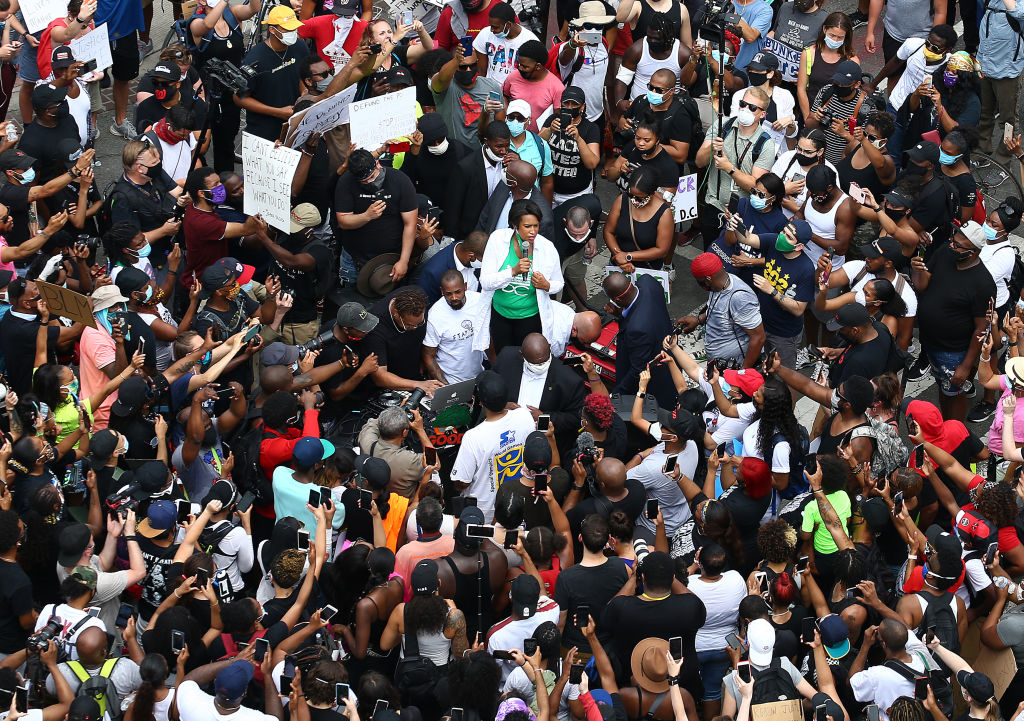 WASHINGTON, DC – JUNE 06: District of Columbia Mayor Muriel Bowser (C) speaks to demonstrators gathered on the newly named Black Lives Plaza during a peaceful protest against police brutality and racism on June 6, 2020 in Washington, DC. This is the 12th day of protests with thousands of people descending on the city to peacefully demonstrate in the wake of the death of George Floyd, a black man who was killed in police custody in Minneapolis on May 25. (Photo by Tasos Katopodis/Getty Images)

Saturday afternoon, Washington, D.C. Mayor Muriel Bowser spoke to tens of thousands of protesters who came to protest against the killing of George Floyd and other African-Americans by police, and encouraged them to continue to speak out against police brutality and racism — and to vote against President Donald Trump in November.

Bowser joined the protesters at the newly-designated “Black Lives Matter Plaza,” a section of NW 16th Street close to the White House. The mayor had overseen the name change, as well as the painting of “Black Lives Matter” in giant yellow letters across the street, on Friday.

The new street sign and street painting were viewed by many as a rebuke to Trump, who has battled with Bowser over the deployment of federal troops in the city, among other matters.

Trump has repeatedly tweeted that governors and local government officials need to “get tough” on protesters, and that if they don’t, he’ll send in the National Guard. Bowser has pushed back against Trump, noting that no arrests were made at the protests on Thursday and the city was lifting the curfew.

After being helped to the stage, Bowser called out to the audience as they cheered, “Welcome to Black Lives Matter Plaza! It’s so wonderful to see everyone peacefully protesting, wearing your mask!”

Bowser criticized the Trump administration for what happened on Monday, when protesters were forcibly ejected from Lafayette Park so that Trump could walk to the nearby St. John’s Episcopal Church for a photo op.

“If you’re like me, you saw something on Monday you hoped you’d never see in the United States of America: federal police moving on American people, peacefully protesting in front of the people’s house,” she said.

She then addressed the killing of George Floyd, which was captured on video, and urged the crowd to continue to “speak up loudly for more justice and more peace.”

She said she also wanted her daughter to grow up “and know that her mother had a chance to say no” to Trump’s deployment of federal troops in her city, “and she did because she knows that Washington, D.C., this nation, and this world would say no too.”

“If he can take over Washington, D.C., he can come for any state, and none of us will be safe,” Bowser added.

“So today, we pushed the army away from our city. Our soldiers should not be treated this way. They should not be asked to move on American citizens.”

“Today, we say no,” she concluded to loud cheers, “In November, we say next.”