WATCH: Protestor Confronts Bill de Blasio Over Non-Essential Travel to Brooklyn for Park Stroll: ‘This Is So Terribly Selfish!’ 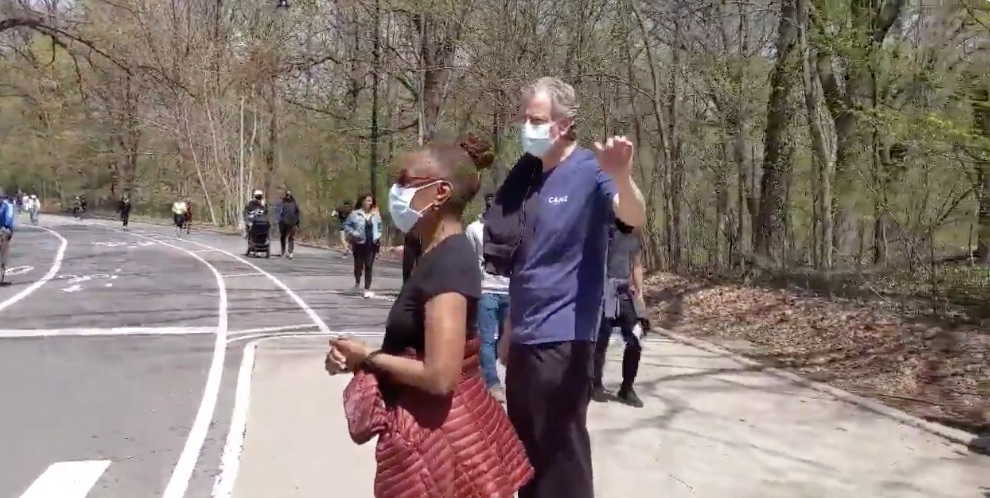 Mayor Bill de Blasio was confronted by a Brooklyn resident over violating the city’s non-essential travel guidelines as the mayor and his wife took an afternoon stroll through Brooklyn’s Prospect Park, 11 miles from his Upper East residence in Manhattan.

Twitter user Darren Goldner posted a video over the weekend that showed him confronting de Blasio, calling him out for hypocrisy and complaining that the mayor has refused widespread closure of streets to enable more pedestrian exercise. Gracie Mansion, the mayor’s residence, sits inside Manhattan’s Carl Schurz Park, which runs alongside the East River from East 84th to East 90th Street. Goldner’s video was later picked up by the New York Post.

“Seriously, you guys have a park, you live in the middle of a park,” Goldner scolded de Blasio as he approached the mayor, who then appears to mockingly wave him off. “You don’t need to non-essentially travel to Brooklyn,” he added, as the mayor and his wife, Chirlane McCray, both wearing masks, walk away.

“Come on guys, give it a break,” the mayor said while walking away, without looking directly at Goldner.

“Come on, you won’t even open roads for people of all backgrounds,” Goldner shot back. “I’m not going to  give it a break. This is selfish behavior. This is so terribly selfish. You call yourself a progressive, but you chauffeur yourself to Brooklyn. You force people to drive you.”

You can’t change the past & will always have blood on your hands.

If I were you, I’d be working night & day to help those in most dire need. Maybe start with your inadequate homeless services. pic.twitter.com/i71ulg7Hvl

Goldner continued to follow de Blasio through the park, as what appeared to be two of the mayor’s aides shadowed him, conspicuously using their bodies to divert Goldner’s progress. At one point, one member of the mayor’s staff, a woman wearing a mask, slides right in front of Goldner and almost stops, and later he notes that their behavior was violating another coronavirus guideline for staying six feet apart from other people.

“You’re getting too close to me to be socially distant,” he pointed out.