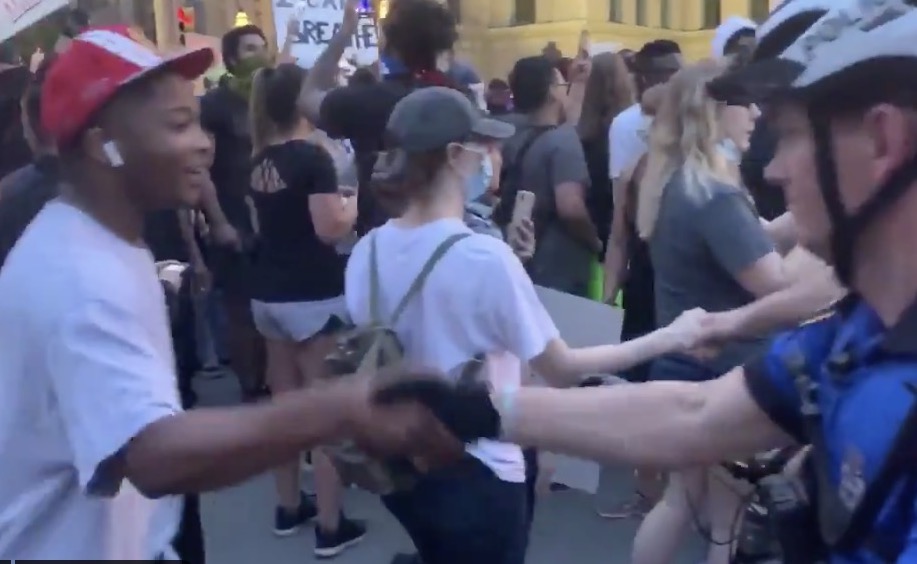 Protestors and the police enjoyed a Capra-esque moment on Monday night, the fourth in a spate of nationwide protests of police brutality towards people of color sparked by the murder of George Floyd a week ago.

As reported by local reporter Scott Gordon of NBC 5, protestors told Fort Worth, Texas police officers they would go home if the officers would take a knee. After the police took a knee in solidarity, tensions lifted and protestors and cops exchange handshakes and hugs. A video clip from that stunning moment can be seen below:

Gordon and Chris Blake filed the following report that explained the stunning interaction:

Police pulled up in a pickup with a loudspeaker and ordered demonstrators to leave because of the curfew.

Protesters pulled out a bullhorn of their own and yelled back, telling officers they had no intention of going home.

As more officers moved in and the situation grew more tense, protesters offered to leave if officers would get on their knees with them.

Remarkably, a number of officers on bicycles in front did just that.

In an instant, the tension gave way to handshakes and hugs between officers and protesters.

About that time, possibly believing the officers in front were in danger, a number of tactical officers ran up and the crowd scattered.

As protests and civil unrest continues, moments of police and protestors deescalating tensions are beginning to be revealed which deserve just as much attention as the violent looting we are also seeing as well.