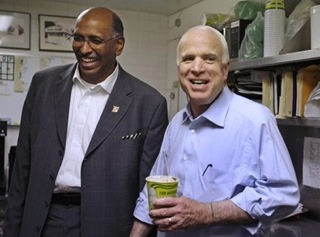 For many Republicans, the very real possibility of chaos in Tampa is nothing short of a nightmare. With the clear establishment choice, Mitt Romney, fulfilling the needs of those in power in style and resources but clearly lacking the substance the base of the party demands, many have begun to second-guess the new system that had led to such discord. Not its creator, Michael Steele, however, who explained today that the Republican primary, as far as he is concerned, is going all to plan.

RELATED: When Michael Steele Reformed The Nomination Process, One Of His ‘Goals’ Was A Brokered Convention

“I wanted a brokered convention,” Steele explained to Mother Jones’ David Corn, giving as his erstwhile reason that the 2008 Clinton/Obama tension appeared to work so well for the Democrats that Steele thought it worth a shot. Better to be in public disarray than to disappear from the public eye at all.

A brokered convention would have never been possible with the mostly winner-take-all rules in every primary state before Steele’s tenure, where taking enough of, say, Detroit, would have handed Romney his entire home state (as it stands, Romney “won” Michigan while losing half the delegate count to Rick Santorum). The system as it stood almost guaranteed that most states in the union would have no stake in the nominee, as the delegates would tally up for one candidate far too quickly—in other words, California, New York, and Michigan Republicans would have no reason to vote in a primary because Iowa, New Hampshire, and South Carolina would have made all the difference. The media certainly wasn’t following the primaries in Kansas and Guam under the old system, and a candidate like Rep. Ron Paul would have left the primaries almost immediately without winning a state (as it stands, Rep. Paul nonetheless has 47 delegates).

The reasoning for opposing the Steele system seems clear: should the new rules prompt a brokered convention with a surprise candidate taking the nomination, their chances of putting together a victorious campaign from scratch against an incumbent in 2-3 months are close to zero. But those who criticize Steele’s move underestimate his ability as leader to make the national Republican Party more accurately reflect those members on the ground and, particularly in 2010, his ability to get those more representative candidates to win election—maybe not as Presidents, but certainly as members of Congress, and with as hawkish as President as President Obama, trading some executive power for legislative is a wise move.

In July 2010, long before the Republicans had the midterm victory in their pocket, I wrote of what I considered Steele’s genius in becoming the party’s de facto lightning rod, keeping the media busy with his own silly bondage-themed night club adventures and away from making every tiny candidate gaffe into a national disaster. It worked, because all publicity is good publicity and bad publicity on someone who isn’t running for office is always better than bad publicity on someone who is.

His strategy also worked because it permitted Republican voters to see most of the good in their candidates without all of the bad—and, because it was a Congressional and not Presidential election, voters only had to agree on the candidates of their region, meaning they could bask in the diversity of their party and celebrate the “big tent” atmosphere with impunity.

2012 is not so different. Big tents win elections no matter what—certainly, PUMAs notwithstanding, the 2008 Democratic Party proved that. Much like America’s other major sport, football, a lot of fair-weather fans stop paying attention to the playoffs once their teams lose. A brokered convention guarantees their energy to flow straight into the general— most bothering to vote in a Republican primary aren’t going to turn around and support President Obama overnight— and whatever it may mean for the White House, Republican candidates will appreciate the coattails.

It is a worthy point to consider that Republicans could risk losing the presidency under this system, but blaming the game when the players are so atrocious is myopic and somewhat irresponsible. Above all tangible qualities, a presidential candidate must exude warmth. He or she must “feel your pain,” must seem like a fun girl or guy “to have a beer with.” Romney is anything if not frigid, Rick Santorum has used the term “man on dog” when discussing LGBT relationships, Newt Gingrich’s family history is about as relatable as Elizabeth Taylor’s, and Ron Paul’s entire shtick is that he thinks only in theory and never in practice. The Presidential election is all but lost at this point, save for a brokered convention resulting in a young, likable, Obama-esque figure like a Sen. Marco Rubio as the presidential candidate.

But the executive branch is only one of three, and it cannot write laws; obsessing over it is politically unwise. The impact of a brokered convention in getting out the Republican vote for Congressional candidates cannot be understated, and 2010 proved that Michael Steele-levels of energy was a winner for the party. It is fair to say that the Tea Party may have generated a large, vocal freshman Congressional populace no matter who was chairing the Republican Party, but it is very difficult to imagine as tremulously cautious a leader as Reince Priebus shepherding candidates like Reps. Allen West and Ben Quayle, Sens. Rand Paul or the aforementioned Rubio to power. These are new, different, loud, powerful voices that, by virtue of their originality alone, are likely only possible within a Republican Party willing to give Christine O’Donnell a chance or to not alienate the young Rep. Paul vote as much as the party for the interim between the rise of Barry Goldwater and that of Steele.

Steele’s was a Republican Party that swung for the fences with its general at the helm; what he left behind was a party hell-bent on serially apologizing both to and for Rush Limbaugh whose leader rules from behind, making occasional appearances to compare the President to people indicted on mass manslaughter charges. The party that effectively kicked Steele out is a fearful one that would rather the dust continue to settle on a stale candidate like Romney than give any lowly party member something to hope for.