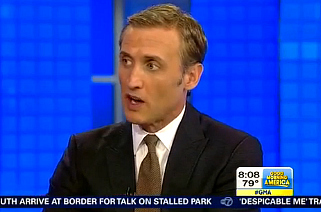 Elaborating on his prediction on Good Morning America yesterday that George Zimmerman would be acquitted, ABC Chief Legal Affairs Anchor and Mediaite founder Dan Abrams wrote Sunday on ABCNews.com that, “Based on the legal standard and evidence presented by prosecutors it is difficult to see how jurors find proof beyond a reasonable doubt that it wasn’t self defense.”

The prosecution in the Zimmerman trial rested last week, after what many consider a weak presentation; the defense, which immediately filed lost a motion to dismiss the charges, will begin to call witnesses on Monday.

“Prosecutors are at a distinct legal disadvantage,” Abrams argued. “They have the burden to prove that Zimmerman did not ‘reasonably believe’ that the gunshot was ‘necessary to prevent imminent death or great bodily harm’ to himself. That is no easy feat based on the evidence presented in their case. Almost every prosecution witness was called to discredit the only eyewitness who unquestionably saw everything that occurred that night, George Zimmerman.”

“Let’s put aside the fact that many of the prosecution witnesses seemed to help Zimmerman in one way or another,” Abrams wrote. “Even if jurors find parts of Zimmerman’s story fishy, that is not enough to convict. Even if they believe that Zimmerman initiated the altercation, and that his injuries were relatively minor, that too would be insufficient evidence to convict.”

Abrams cited both Zimmerman’s injuries, and the testimony of the closest witness, who said he saw Trayvon Martin on top of Zimmerman during their fight, as more than enough to create reasonable doubt in a jury, especially one considering a murder and manslaughter charges rather than lesser crimes.

Abrams also pointed out that Zimmerman’s claim of self defense was legally strong. “If jurors believe Zimmerman followed Martin, maybe even racially profiled him and initiated the altercation, can Zimmerman still legally claim he needed to defend himself and walk free?” Abrams asked. “Yes. If these jurors have questions or doubts about whether, at the moment he fired the fatal shot, Zimmerman ‘reasonably’ feared that this was the only way to stop from getting beaten further, then they have to find him not guilty.”

“Juries are notoriously impossible to predict,” Abrams added, “and the deliberation process can take on a life of its own, but if they follow the letter of the law, it’s hard to see, based on everything we know now, how they find him guilty of either murder or even manslaughter.”