Adam Carolla Goes to Washington For Campus Free Speech: ‘We Are the Adults, We Need to Act Like It’
Opinion

Adam Carolla Goes to Washington For Campus Free Speech: ‘We Are the Adults, We Need to Act Like It’ 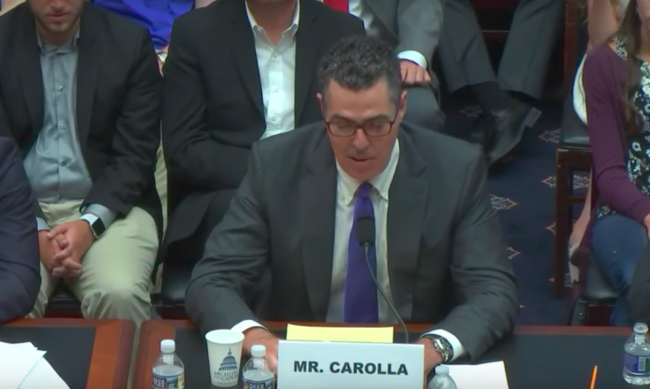 When a Hollywood celebrity testifies before congress on their pet environmental or social justice issue it’s usually met with fawning press coverage and sanctimonious intonations from self-righteous politicians eager to share the limelight with an actor or singer or reality show regular.

So when actor, writer, producer, director, author, radio host, podcaster and, yes, reality show regular, Adam Carolla testified last week at a House Oversight hearing, you’d think it would get a little more attention than it did.

Carolla, along with conservative pundit and author Ben Shapiro, at a hearing titled “Challenges to Freedom of Speech on College Campuses” and his testimony was bracing, smart and undeniably entertaining.

With one wickedly well-constructed line Carolla blew apart the coddling instinct so many take when trying to wear kid gloves while confronting the very real and dangerous, totalitarian climate on American campuses:

We’re talking a lot about the kids and I think they’re just that, kids. We are the adults. And I don’t think that we’re doing the children — I mean, these are 18- and 19-year-old kids at these college campuses. They grew up dipped in Purell, playing soccer games where they never kept score and watching Wow! Wow! Wubbzy!, and we’re asking them to be mature. We need the adults to start being the adults.

Children are the future, but we are the present, and we are the adults and we need to act like it. And I feel that what’s going on on these campuses is — we need law and order. We need to bring back law and order. But I think if we just had order we wouldn’t need law. So, could we just bring back order, and could the faculty and administration on these campuses act like faculty and administration?

Carolla followed up his appearance before congress with an op-ed in The Hill:

I’ve been doing talk radio for more than three decades and I host a daily podcast. This means I constantly have guests on who disagree with me on many subjects. Challenging their ideas and points of views — while they do the same to me — is an important part of the public discourse. One thing I’ve learned about Americans from talking with them for more than 30 years is that we like to argue and debate, even among friends — and we’re damn good at it.

The element of debate is a hallmark of our country, from the time of Sam Adams. By the way, he was not named after the beer, the beer was named after him. So, if you learn nothing else from today, hang on to that.

But seriously, America has been that “safe space” where truth can be spoken to power. Where “We the People” can challenge a king and a corrupt idea like a monarchy. This right has been reaffirmed through our history. It’s been fought for, and people have died for it. We must understand that we have the right to free expression, not the right to not be offended. This fundamental difference is being lost on today’s college campuses.

We should not be teaching students to retreat from debate, but to charge intellectually into it. This is one of the most valuable and profound gifts given to us in the founding of America.

Carolla is set to roll-out a documentary film on the campus speech issue which he created with fellow talk radio host Dennis Prager. The film, titled No Safe Spaces, was funded through an online effort and the fundraising trailer gives a good idea of the approach Carolla and Prager will take:

This is good stuff and the kind of argument against the rioting snowflakes that hardly get made or heard by someone from the corridors of influence in the entertainment industry.  At the film’s website you’ll see a headline stating “Hollywood Won’t Make This Film,” and sadly, that appears to be true.

You’d think those who make millions off the first amendment (and I don’t begrudge them one cent) would be a little quicker to fret about the mob using violence to silence speech because they don’t like the message being delivered. What we’re seeing at Berkley is a little more disconcerting than a radio station burning some Dixie Chicks CDs. (Remember that?)

The destruction of Dixie Chicks CDs was compared to Nazi’s burning books (because everything that happens during a Republican presidency is a baby step away from Nazism) and there were endless interviews and think pieces about the horrible ordeal Natalie Maines had to endure during the darkest time in American history… up until November 8th 2016, of course.)

However, compared to that wartime controversy there’s nary a peep today from the same artists who were horrified at those peaceful protests against the Dixie Chicks. Yet the violence on college campuses prohibiting speeches by Carolla, Shapiro, Ann Coulter, Milo Yiannoupolis, Charles Murray and others is far more dangerous, chilling and insidious. After all, UC Berkley is owned, operated and funded by the California state government. Maybe it’s me, but I find that a little more problematic than a publicity stunt by WDAF in Kansas City, MO.