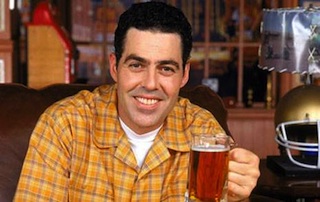 So, what was it that inspired the Occupy movement? Was it a growing realization that the privileged had been gaming the system, making transition between social classes nearly impossible? Was it annoyance at a corrupt collusion between politicians and banks, one that kept those responsible for ruining our economy for future generations out of prison? Or was it simply a feeling that, were no one to speak up, things would continue to get worse? Well, according to Adam Carolla, the blame lies squarely on one sinister culprit; participation medals. In a lengthy rant on his hugely popular podcast, Carolla explained just how growing up in a culture of entitlement had created a generation of, as he sees it, “ass douches.”

According to Carolla, the Occupiers weren’t born out of a hatred for corruption, greed, or white collar crime, but, rather, years of being told that they deserve a medal no matter what. He explained his Incredibles-esque view thusly:

“We’ve created a bunch of fucking self-entitled monsters. And this has become the pursuit of my life where people are so far out of it in what they expect and what they think realistic is and what the set of rules that pertains to them versus the other guys- Because that’s what the bottom line is. ‘I want my Most Valuable Player trophy.’ ‘Well, you’re the slowest, fattest guy on the team.’ Why should he get one and I don’t?’ ‘Because he busts his ass and he runs a 4.4 40. That’s why he gets one.’ ‘Well, this is bullshit.’ And then everyone gets involved and everyone gives everyone a participation trophy and then everyone feels good about themselves but it’s not based on anything. You should feel good about yourself because of your accomplishments. Not because someone yelled at you to feel good about yourself and you got a fake fucking piece of plastic that was sprayed gold and had your name on a plaque at the bottom. And, when these people become adults and enter the work place”

Carolla argued that we’ve been raising our children this way for 25 years and now “we’re getting the first wave of these douche bags.” It’s an interesting theory although it doesn’t entirely explain the Occupiers that weren’t born in the 80s but are instead in their 80s.

Over at Breitbart.tv, they characterized this rant as being the only one to truly “capture” how their readers feel about the protest movements and I think they’re probably right. There’s a reason Carolla’s show does so well and I think this is probably exactly how many folks view the movement; as a bunch of douche bags.

Still, the Occupiers shouldn’t feel too bad. He called them “ass douches” and, after all, isn’t their whole goal to flush out some bad crap that’s clogging a system. Remember, douche bags are hygienic products.

Listen to the rant below: